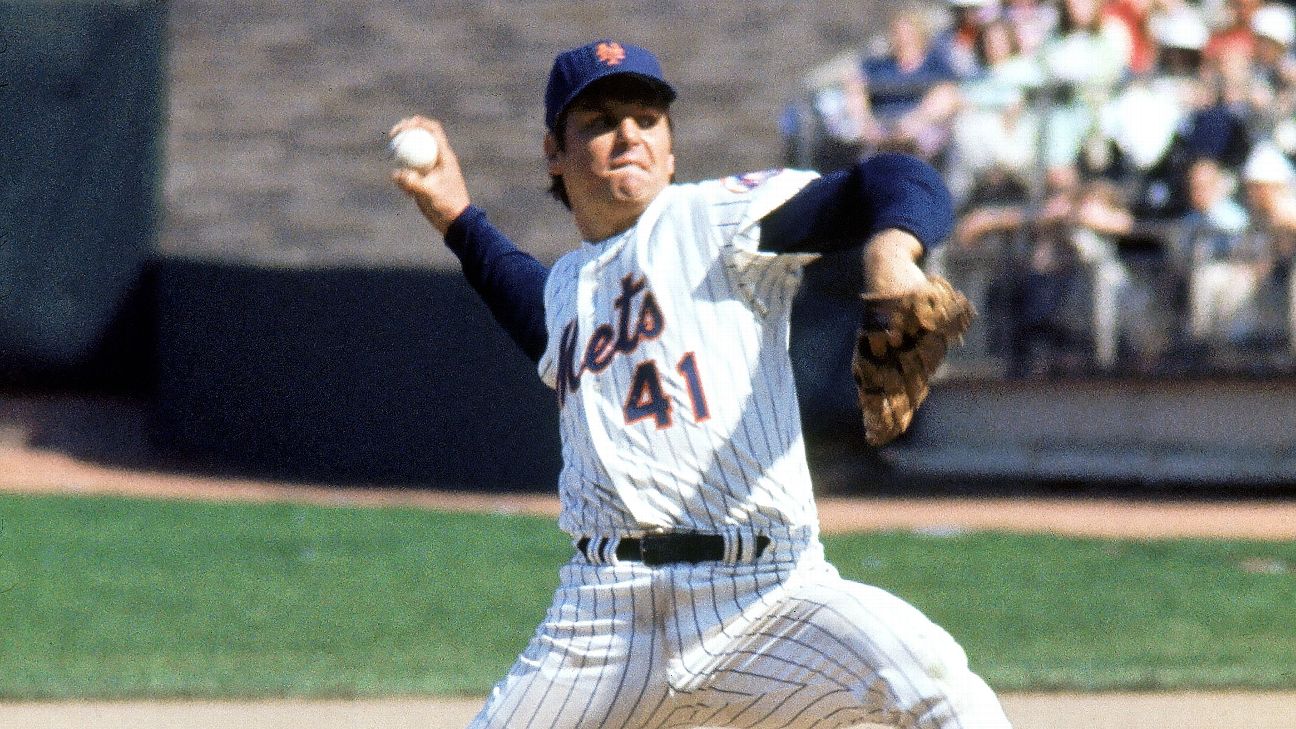 NEW YORK -- Tom Seaver transformed a franchise and captivated a city, setting enduring standards as he whipped his powerful right arm overhead for the Miracle Mets and dirtied his right knee atop major league mounds for two decades.

A consummate pro and pitching icon, he said he was fulfilled after a career remembered with awe long after his final strikeout.


"It is the last beautiful flower in the perfect bouquet," Seaver said on the afternoon he was inducted into baseball's Hall of Fame.

Seaver, the galvanizing force who steered the New York Mets from the National League cellar to a stunning World Series title in 1969, has died. He was 75.

Seaver's family announced in March 2019 that he had been diagnosed with dementia and had retired from public life. He continued working at Seaver Vineyards, founded by the three-time NL Cy Young Award winner and his wife, Nancy, in 2002 on 116 acres at Diamond Mountain in the Calistoga region of Northern California.

Seaver was diagnosed with Lyme disease in 1991, and it reoccurred in 2012 and led to Bell's palsy and memory loss, the Daily News of New York reported in 2013.

"He will always be the heart and soul of the Mets, the standard which all Mets aspire to," Mike Piazza, a former Mets catcher and Hall of Famer, tweeted when Seaver's dementia diagnosis was announced.

Said ex-Mets closer and captain John Franco: "As a kid, you always wanted to be Tom Seaver."

Nicknamed "Tom Terrific" and "The Franchise," Seaver was a five-time 20-game winner and the 1967 NL Rookie of the Year. He went 311-205 with a 2.86 ERA, 3,640 strikeouts and 61 shutouts during an illustrious career that lasted from 1967 to 1986. He became a constant on magazine covers and a media presence, calling postseason games on NBC and ABC even while still an active player.

"He was simply the greatest Mets player of all-time and among the best to ever play the game," Mets owner Fred Wilpon and son Jeff, the team's chief operating officer, said in a statement.

Seaver was elected to the Hall of Fame in 1992 when he appeared on 425 of 430 ballots for a then-record 98.84%. His mark was surpassed in 2016 by Ken Griffey Jr., again in 2019 when Mariano Rivera became the first unanimous selection by baseball writers, and in 2020 when Derek Jeter fell one vote short of a clean sweep.

"Tom was a gentleman who represented the best of our national pastime," commissioner Rob Manfred said in a statement. "He was synonymous with the New York Mets and their unforgettable 1969 season.

"After their improbable World Series championship, Tom became a household name to baseball fans -- a responsibility he carried out with distinction throughout his life," he said.

Seaver's plaque in Cooperstown lauds him as a "power pitcher who helped change the New York Mets from lovable losers into formidable foes." He changed not only their place in the standings but the team's stature in people's minds.

"Tom Seaver hated to lose," said Jerry Grote, his longtime catcher with the Mets. "In May of 1969, we had a celebration in the locker room when we reached .500 for the first time. Tom said, 'We want more than .500, we want a championship.'"


Seaver pitched for the Mets from 1967 to 1977, when he was traded to Cincinnati after a public spat with chairman M. Donald Grant over Seaver's desire for a new contract. It was a clash that inflamed baseball fans in New York.

"My biggest disappointment? Leaving the Mets the first time and the difficulties I had with the same people that led up to it," Seaver told The Associated Press ahead of his Hall induction in 1992. "But I look back at it in a positive way now. It gave me the opportunity to work in different areas of the country."

Hall of Fame manager Sparky Anderson, who had Seaver on his 1977 and '78 Reds teams, said, "My idea of managing is giving the ball to Tom Seaver and sitting down and watching him work."

Seaver threw his only no-hitter for the Reds in June 1978 against St. Louis and was traded back to New York after the 1982 season. But Mets general manager Frank Cashen blundered by leaving Seaver off his list of 26 protected players, and in January 1984 he was claimed by the Chicago White Sox as free-agent compensation for losing pitcher Dennis Lamp to Toronto.

While pitching for the White Sox, Seaver got his 300th win at Yankee Stadium and did it in style with a six-hitter in a 4-1 victory. He finished his career with the 1986 Boston Red Sox team that lost to the Mets in the World Series.

"Tom Seaver was one of the best and most inspirational pitchers to play the game," Reds chief executive officer Bob Castellini said in a statement. "We are grateful that Tom's Hall of Fame career included time with the Reds. We are proud to count his name among the greats in the Reds Hall of Fame. He will be missed."

Supremely confident -- and not necessarily modest about his extraordinary acumen on the mound -- Seaver was a 12-time All-Star who led the major leagues with a 25-7 record in 1969 and a 1.76 ERA in 1971. A classic power pitcher with a drop-and-drive delivery that often dirtied the right knee of his uniform pants, he won Cy Young Awards with New York in 1969, 1973 and 1975. The club retired his No. 41 in 1988, the first Mets player given the honor.

"From a team standpoint, winning the '69 world championship is something I'll remember most," Seaver said in 1992. "From an individual standpoint, my 300th win brought me the most joy."

Seaver limited his public appearances in recent years. He did not attend the Baseball Writers' Association of America dinner in 2019, where members of the 1969 Mets were honored on the 50th anniversary of what still ranks among baseball's most unexpected championships.

Five months later, as part of a celebration of that team, the Mets announced plans for a statue of Seaver outside Citi Field, and the ballpark's address was officially changed to 41 Seaver Way in a nod to his uniform number.

Seaver did not attend those ceremonies, either, but daughter Sarah Seaver did and said her parents were honored.

"This is so very appropriate because he made the New York Mets the team that it is," said Ron Swoboda, the right fielder whose sprawling catch helped Seaver pitch the Mets to a 10-inning win in Game 4 of the '69 Series against Baltimore. "He gave them credibility."

Seaver's death was announced, in fact, hours after the Mets beat the Orioles in an interleague game.

"Just a class act. Just a gentleman in the way he handled himself, and really the way handled his whole career," said Miami manager Don Mattingly, a former New York Yankees captain. "We just left New York, and every time you walk in a door there, it's like Tom Seaver Hall, with different pictures."


When the Mets closed their previous home, Shea Stadium, on the final day of the 2008 regular season, Seaver put the finishing touches on the nostalgic ceremonies with a last pitch to Piazza, and the two walked off together waving goodbye to fans.

"He was a star. A shining star,'' Mets teammate Ed Kranepool said. "No one can replace Tom Seaver."

Seaver is survived by Nancy, daughters Sarah and Anne, and grandsons Thomas, William, Henry and Tobin.

George Thomas Seaver was born in Fresno, California, on Nov. 17, 1944, a son of Charles Seaver, a top amateur golfer who won both his matches for the U.S. over Britain at the 1932 Walker Cup.

Tom Seaver was a star at the University of Southern California and was drafted by Atlanta in 1966. He signed with the Braves for $51,500 only for commissioner William Eckert to void the deal. The Trojans already had played exhibition games that year, and baseball rules at the time prohibited a club from signing a college player whose season had started. Any team willing to match the Braves' signing bonus could enter a lottery, and Eckert picked the Mets out of a hat that also included Cleveland and Philadelphia.

Among baseball's worst teams from their expansion season in 1962, the Mets lost more than 100 games in five of their first six seasons and had never won more than 73 in any of their first seven years. With cherished Brooklyn Dodgers star Gil Hodges as their manager, a young corps of pitchers led by Seaver, Jerry Koosman, Gary Gentry and a still-wild Nolan Ryan, and an offense that included Cleon Jones and Tommie Agee, the Mets overtook the Chicago Cubs to win the NL East with a 100-62 record in 1969.

They swept Hank Aaron and the Atlanta Braves in the first NL Championship Series to reach the World Series against highly favored Baltimore, which had gone 109-53. Seaver lost the opener 4-1 in a matchup with Mike Cuellar, then pitched a 10-inning six-hitter to win Game 4, and the Mets won the title the following afternoon.

Seaver was an All-Star in each of his first seven seasons. Aaron introduced himself to Seaver at the pitcher's first All-Star Game in 1967.

"Kid, I know who you are, and before your career is over, I guarantee you everyone in this stadium will, too," Aaron said.

For Seaver, that All-Star appearance made him feel like he belonged.

"I may have been paid before, but that's when I really became a professional," he said.

Perhaps Seaver's most memorable moment on the mound was at Shea Stadium on July 9, 1969, when he retired his first 25 batters against the Chicago Cubs. Pinch hitter Jimmy Qualls looped a one-out single to left-center in the ninth inning before Seaver retired Willie Smith on a foul out and Don Kessinger on a fly out.

"I had every hitter doing what I wanted," Seaver recalled in 1992. "Afterward, my wife was in tears and I remember saying to her: 'Hey, I pitched a one-hit shutout with 10 strikeouts. What more could I ask for?'" 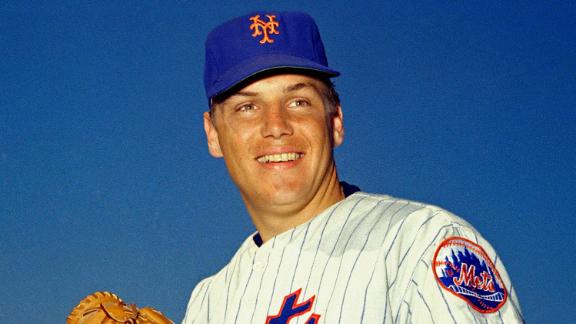