Tom Thibodeau: 'No regrets' on time with Bulls 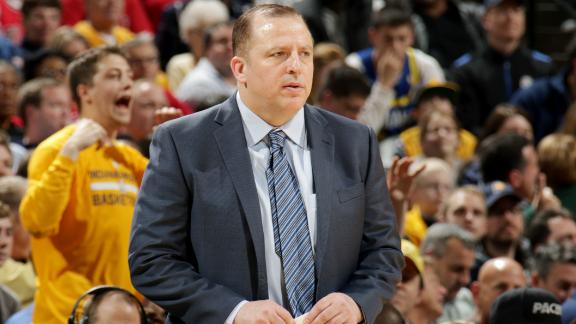 Tom Thibodeau, speaking publicly Friday for the first time since being fired by the Chicago Bulls, said he has "no regrets" and doesn't believe his icy relationship with Bulls executives Gar Forman and John Paxsonaffected the team in any way.

"I would like to think it didn't have any because if you allow yourself to be distracted, you're going to be distracted by a lot of other things as well," Thibodeau said during an appearance on Mike & Mike on ESPN Radio.

"And so as players, as coaches, you're going to hear things all the time. Whether it's trades, or being fired, whatever it might be. I think the important thing is to lock into what you have to do each and every day, put everything you have into it, and then you let the results speak for themselves. I have no regrets. It was a great run and I just move on."

Thibodeau, who was fired on May 28,didn't want to go into detail concerning his relationship with Forman and Paxson. The Bulls lost in the second round of the Eastern Conference playoffs to LeBron James and the Cleveland Cavaliers.

"Obviously, there were some issues, and I don't want to get into all that," Thibodeau said. "I'm very proud of what the team did. ... I think any time when you have a pro franchise, there's going to be some carping that goes on along the way."

During a news conference to announce Thibodeau's firing, Forman and Paxson stressed the need for a better communicator and painted a picture that Thibodeau wasn't listening to much of the input from the front office.

"While the head of each department of the organization must be free to make final decisions regarding his department, there must be free and open interdepartmental discussion and consideration of everyone's ideas and opinions," the statement said. "These internal discussions must not be considered an invasion of turf, and must remain private. Teams that consistently perform at the highest levels are able to come together and be unified across the organization -- staff, players, coaches, management and ownership. When everyone is on the same page, trust develops and teams can grow and succeed together. Unfortunately, there has been a departure from this culture."

Thibodeau said Friday that he wasn't worried about comments from the Bulls' front office in the immediate aftermath after the decision was made.

"I don't worry about stuff like that," Thibodeau said. "I know for me, I put everything I have into each and every day. So I have no regrets. I'm going to let the record speak for itself."

Thibodeau instead preferred to focus on the positives during his five-year tenure.

"It was a great experience for me. I loved our players; I loved my staff," Thibodeau said. "Derrick (Rose) going down was a big hit for us. He missed a major part of four seasons, so we really had him for one year, where he had the MVP season, and that was huge for us. And we lost a lot of other guys along the way.

"But the team always found a way, and sometimes I sat there and I didn't know how. They did an incredible job, they fought through that adversity, made the playoffs every year. We gave it our best shot; we fell short in the end. And then I'm going to move on, I'm looking forward to the next opportunity, so here I am. ...

"I think the big thing is to study and prepare, and try to do it better the next time. So there's a lot of things that I learned from the experience. ... So whatever the next opportunity is, I'll take those lessons and try to use them."