Tom Thibodeau out in Chicago as Bulls seek 'change in approach' 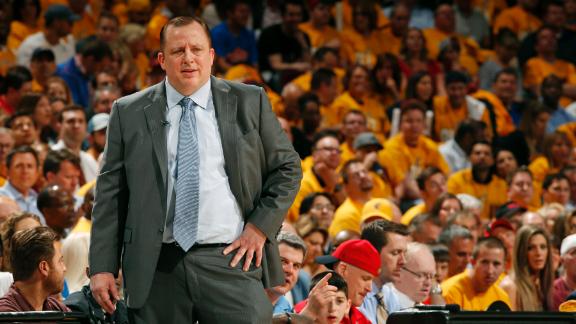 The Chicago Bulls fired Tom Thibodeau on Thursday, saying a change was needed despite the team reaching the playoffs in each of his five seasons.

Thibodeau, whose Bulls were eliminated by the Cleveland Cavaliers in the Eastern Conference semifinals earlier this month, had two years and nearly $9 million remaining on his contract.

But sources say the Bulls' dissatisfaction with their coach, beyond the well-chronicled tension between Thibodeau and Bulls general manager Gar Forman and executive vice president John Paxson, had risen in the wake of the Bulls' inability to beat injury-plagued Cleveland in the playoffs and a lack of offensive flow to match their usual defensive tenacity.

"The Chicago Bulls have a history of achieving great success on and off the court," Bulls chairman Jerry Reinsdorf said in a statement announcing the firing. "These accomplishments have been possible because of an organizational culture where input from all parts of the organization has been welcomed and valued, there has been a willingness to participate in a free flow of information, and there have been clear and consistent goals. While the head of each department of the organization must be free to make final decisions regarding his department, there must be free and open interdepartmental discussion and consideration of everyone's ideas and opinions. These internal discussions must not be considered an invasion of turf, and must remain private. Teams that consistently perform at the highest levels are able to come together and be unified across the organization -- staff, players, coaches, management and ownership. When everyone is on the same page, trust develops and teams can grow and succeed together.

"Unfortunately, there has been a departure from this culture. To ensure that the Chicago Bulls can continue to grow and succeed, we have decided that a change in the head coaching position is required. Days like today are difficult, but necessary for us to achieve our goals and fulfill our commitments to our fans. I appreciate the contributions that Tom Thibodeau made to the Bulls organization. I have always respected his love of the game and wish him well in the future."

"It is our strong belief that there needs to be a culture of communication that builds a trust throughout this organization," Forman said. "From the players, to the coaches, to the management and to the front office, a culture when everybody is pulling in the same direction. When that culture is sacrificed, it becomes extremely difficult to evolve and to grow. And today's decision was about giving this team an opportunity to grow into the future."

Paxson acknowledged that the divide, which had been discussed throughout the league for months, was apparent in the organization.

"Obviously, there was a breakdown," Paxson said. "That's not a secret by any stretch of the imagination."

Despite lingering tension within the organization, Paxson stated that if the Bulls had reached the NBA Finals, he likely still would be the coach.

"If we were in a championship series right now, this conversation would not be had," Paxson said. "So people that want to jump the gun are mistaken."

Thibodeau released a statement Thursday evening and thanked the fans, the city of Chicago and said he appreciated the "opportunity that Jerry Reinsdorf gave" him to become a head coach, but steered clear of any controversy.

Forman said the final decision was made Wednesday night, and Thibodeau was given the news Thursday morning.

Thibodeau pulled into the Advocate Center parking lot around noon ET on Thursday. He left 45 minutes later after the Bulls released news of his firing.

Guard Jimmy Butler, who was among the players and assistant coaches who filed in and out of the practice facility Thursday, declined comment as he drove away. Forman said assistant coach Andy Greer also was let go.

Joakim Noah, in a text message to ESPNChicago.com, said: "I just want to thank thibs for all the hard work he put in and I wish him the best."

President Barack Obama, who lived in Chicago and is a Bulls fan, weighed in on the firing when asked how he felt during a question-and-answer session on Twitter.

Thibodeau's tenure will be defined for the consistent, hardworking culture he helped reinstate for the first time since Michael Jordan left the franchise. During Thibodeau's first four years, his teams made a habit of overachieving in the regular season and then running out of gas, and talent, in the playoffs.

Overall, the Bulls struggled in the postseason under Thibodeau, going 23-28 in five appearances, none of which resulted in a trip to the NBA Finals. The furthest they went was the East finals in 2011, losing to LeBron James and the Miami Heat in five games.

In all, James-led teams in both Miami and Cleveland ended three of the Bulls' five Thibodeau-led seasons.

Thibodeau's fifth season was when the writing appeared to be on the wall. After watching the team appear to run out of gas yet again during the 2014 postseason, Forman and Paxson told Thibodeau that Rose and Noah were not to play more than 32 minutes a game during the season as they made their way back from knee surgeries. It was the first time in Thibodeau's tenure that he wasn't allowed to make all his own decisions on the floor, and his frustration regarding the edict was present throughout the season.

The Bulls continued to have success, but the consistency that defined them during Thibodeau's tenure went missing during parts of this season. Players still respected Thibodeau for the work he put in, but they chafed at his pedal-to-the-metal approach after five years of hearing the same message.

"When Tom was hired in 2010, he was right for our team and system at that time, and over the last five years we have had some success with Tom as our head coach," Forman said in a statement. "But as we looked ahead and evaluated how we as a team and an organization could continue to grow and improve, we believed a change in approach was needed."

Now, the Bulls will be searching for their 22nd head coach in franchise history (including interims).

Their interest in Iowa State's Fred Hoiberg as a replacement for Thibodeau has been an open secret around the league for months, but it is not yet clear whether Chicago has a commitment from Hoiberg to make the jump to the pros. Hoiberg, who played for the Bulls for four seasons during his 10-year NBA career, has a close relationship with several members of the Bulls' front office, including Forman.

The Minnesota Timberwolves also are known to have a strong interest in Hoiberg.

The Ames Tribune, citing sources with knowledge of the situation, reported that Hoiberg has told at least one recruit that his future at Iowa State is uncertain.

Forman does not want to put the Bulls in a box in terms of characteristics they are looking for in a new coach, but it is clear from his statements Thursday that the front office wants the next coach to communicate with people better throughout the organization.

Thibodeau, meanwhile, may not be out of work for long.

The New Orleans Pelicans and Orlando Magic are known to be interested in speaking to him about their head-coaching vacancies. Former Magic guard Scott Skiles is the widely reported front-runner for the Orlando job, while Golden State Warriors associate head coach Alvin Gentry and ESPN analyst Jeff Van Gundy have emerged as the known top candidates in New Orleans along with Thibodeau.

Sources told ESPN on Wednesday that the Bulls are confident they won't have to pay the bulk of Thibodeau's contract if another team hires him because of "set-off provisions" in coaching deals.

"In regards to the timing, I know there's been a lot out there as far as, were we looking for an asset or were we trying to use this as some type of leverage ploy? And nothing could be further from the truth," Forman said. "When we make a decision like this, which is a major decision, trying to acquire a second-round pick or some type of asset like that is no factor at all. We received no calls in regards to Tom, and if we had we would have given permission for him to speak to another team as we went through this process."

Thibodeau era over in Chicago
Take a look back at Tom Thibodeau's five years as the head coach of the Bulls, and explore why his tenure has reached its end.