Tony Stewart to keep on racing 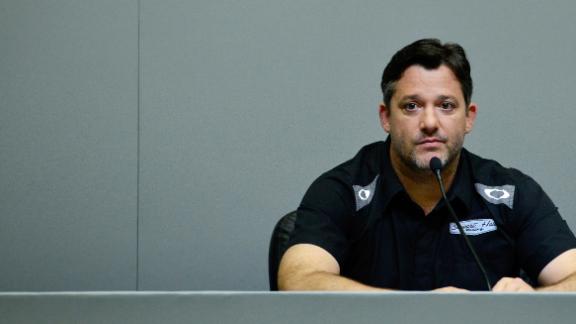 Three-time NASCAR Cup champion Tony Stewart doesn't see himself getting behind the wheel of a sprint car again but on Monday said he will continue his racing career.

"I love what I do. I love driving race cars. I think it might change, right now, as far as how much of it and what I do. There was never a thought in my head about stopping. That would take the life out of me."

Stewart took questions from reporters for the first time in the seven weeks since the death of Kevin Ward Jr., who was struck by Stewart's sprint car as Ward walked on an upstate New York dirt track Aug. 9 in an apparent attempt to confront the NASCAR star during a race.

A grand jury decided Stewart would not be charged in Ward's death.

Stewart told The Associated Press on Thursday that he was unsure if he will ever race sprint cars again and repeated that Monday.

He also admitted that he has not been fully engaged with Stewart-Haas Racing, the race team he co-owns. He missed three Sprint Cup races after Ward's death as he secluded himself at his Indiana home but has been back since the Aug. 31 race at Atlanta.

"Driving a race car has consumed my life. It's all I've thought about, it's all I've cared about, and everything else was second on down the list of priorities for me," Stewart said. "This has given me the opportunity to sit here and think about other aspects of my life and what they're really going to mean to me in the future. ... It's made me think about some of those other aspects of my life that have kind of been put on hold for years."

Asked if he could change the events of the past two months, Stewart said only that he "would've stayed at Watkins Glen" and not gone to race at Canandaigua Motorsports Park.

"I race those cars to have a good time," said Stewart, who insisted that he "just wanted to have some fun that night."

Stewart said he would be available to discuss the events of that evening with Ward's family.

"I want to be available to them if they want to talk about it. At this point, I don't need to talk to them for closure," he said. "I know what happened and I know it was an accident, but I'm offering to talk to them to help them if it helps with closure."