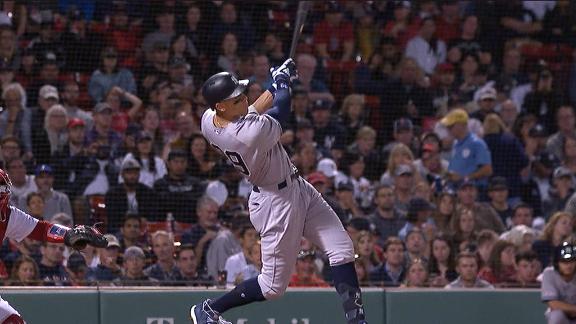 BOSTON -- The Bronx Bombers have a new record for home runs and 18 games still to go.

Gleyber Torres, Mike Tauchman, Aaron Judge hit home runs as the New York Yankees broke the franchise record for homers in a season Sunday night in a 10-5 win over the Red Sox.

"Today was really good to see because I felt like we were heavy again," manager Aaron Boone said. "When you play us, my goal is always when you're facing our offense, I want you to feel it. Today I felt like that was the case. I felt like we made it very difficult on them."

The Yankees have won two of three in the four-game series that wraps up Monday night. The slumping Red Sox announced after the game that they have parted ways with president of baseball operations Dave Dombrowski.

While the Boston clubhouse was almost silent following the loss and the stunning news of a major front office move, the Yankees' clubhouse was thumping with loud music and yet another victory celebration.

The Yankees won for the fourth time in five games and improved to 94-50, keeping pace with Houston for the top record in the majors. New York also moved a step closer to claiming the AL East with another victory over the rival Red Sox, whose string of three straight division titles is coming to an end.

The Yankees entered the game two homers shy of the club record of 267, set last year. Torres' two-run shot in the second was No. 266, Tauchman went deep with a man on in the fourth and Judge added the record-breaker by leading off the fifth with his 21st of the season.

"We hit into some hard outs today and gave ourselves a lot of opportunities," Boone said. "I thought the guys overall had a lot of great at-bats tonight."

Torres went 3 for 5 with four RBI. His 35th homer moved him one ahead of Gary Sanchez for the club lead.

The only low point for the Yankees on Sunday was losing Tauchman in the fourth inning when he came up limping while fielding a routine single. Tauchman left with tightness in his left calf.

"It felt like I got kicked, which would be weird because I was the only person in left field," Tauchman said.

Tauchman was scheduled to return to New York and be evaluated Monday, when his teammates will wrap up the four-game series at Boston.

"I'm not going to speculate until we get the test results back. So, we'll do that," Tauchman said. "I'm sure in the next 24 hours we'll have a little bit clearer picture, but whatever happens it's just, whatever the time frame is I'm just going to do my best to get back on the field."

Although it's already a given that Boston won't win the AL East again, one more win for the Yankees or another loss by the Red Sox will guarantee it. The Red Sox would like to avoid having that happen at Fenway Park, if possible.

Jackie Bradley Jr. and Mookie Betts homered for the Red Sox, who lost for the third time in four games. Boston fell eight games behind Oakland for the second AL wild-card spot with only 19 games remaining.

Chad Green (3-4) pitched three perfect innings of relief for New York and got the victory. Rick Porcello (12-12) lasted just four innings for Boston, which used eight pitchers before it was finally over.

Porcello got the Yankees in order in the first, but the game unraveled quickly from there for the Red Sox. New York scored a pair of runs in each of the next four innings and the Red Sox never recovered.

After Bradley pulled Boston within 4-2 on a two-run homer in the third, Torres led off the fourth with a single and scored on Tauchman's homer to right.

Porcello allowed six runs on seven hits. Ryan Brasier took over in the fifth and Judge jumped on the second pitch he saw for a homer to left that put the Yankees up 7-4.

Masahiro Tanaka went four innings for the Yankees, allowing four runs on eight hits and striking out one. He was replaced in the fifth by Green, who struck out five and did not allow a baserunner in his three innings of work.

The Red Sox honored Yankees lefty CC Sabathia before the game with a No. 52 from Fenway Park's iconic left-field scoreboard. Sabathia, who is on the injured list with inflammation in his right knee, received a standing ovation from the Fenway fans and players from both clubs after Red Sox lefty David Price presented him with the green placard.

Yankees: RHP Luis Severino (right shoulder rotator cuff inflammation, lat injury) will make another rehab start for Double-A Trenton on Wednesday and probably return to the Yankees after that, manager Aaron Boone said. ... Sabathia will do some light throwing Monday and is scheduled to start Wednesday at Detroit. ... OF Aaron Hicks (right flexor strain) will get a second opinion Monday after having a setback in his rehab, Boone said. ... New York reinstated 3B Gio Urshela (left groin) and IF Thairo Estrada (right hamstring) from the injured list and recalled C Kyle Higashioka and IF Brevic Valera from Triple-A Scranton/Wilkes-Barre.