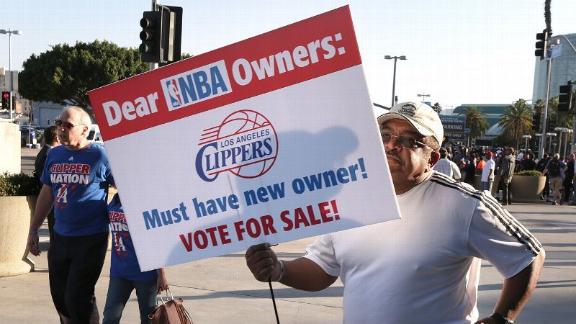 Commissioner Adam Silver wants Sterling to sell the franchise as part of the extremely stiff sanctions brought against the NBA's longest-tenured owner in response to racist comments the league determined he made in a recorded conversation.

Silver banned Sterling for life, fined him $2.5 million and said he will press the other teams to support his desire to make Sterling sell.

"I fully expect to get the support I need from the other NBA owners to remove him,'' Silver said.

The NBA owners' advisory and finance committee will hold a meeting Thursday to discuss the next steps Sterling's removal.

"There's still a process that the NBA has to go through," Ranadive said Wednesday. "I expect that they'll have a sub-committee that examines this issue and takes it to the entire board.

"The commissioner has shown that he can act quickly, so I expect him to continue acting quickly."

For Sterling to be forced to sell, 75 percent of the teams would have to vote in favor of such a move. That means if 29 teams vote, Silver would have to get 22 yes votes. If all 30 clubs have a vote, the number needed for passage rises to 23.

While only a handful of teams indicated publicly Tuesday that they would follow Silver's recommendation, a source close to the situation told Stein that the vote is expected to be 29-0 against Sterling.

As teams and owners issued statements or tweets after Silver's news conference Tuesday, most chose to say they supported the commissioner's ruling without addressing a potential vote. The Associated Press contacted 24 teams on the specific question of whether Sterling should be forced to sell, and 16 ownership groups said yes, while another eight declined to reveal their stance.

Ranadive, a native of India, said he was shocked and outraged by Sterling's comments, which were revealed over the weekend as part of an audio recording.

In the taped conversation with his girlfriend, Sterling specifically objected to photos that the woman posted of herself with Hall of Famer Magic Johnson.

"It bothers me a lot that you want to broadcast that you're associating with black people. Do you have to?" Sterling asks the woman on the tape.

"I have had overwhelming support for this position," Ranadive said. "People were outraged by these comments. This is really a global game -- you have people from all parts of the world, all skin colors, all religions. The only thing we care about is if you have game.

Ranadive said Tuesday in a phone interview with ESPN.com that he thought Silver's discipline against Sterling "sent a very clear, unequivocal and decisive message that we will have zero tolerance" for racist behavior in the NBA.

Ranadive also conducted an interview Wednesday with ABC's "Good Morning America," saying he would urge Sterling to "do the right thing" by selling the Clippers.

"What I would say to Mr. Sterling is, 'Mr. Sterling, do the right thing now,'" he said. "'Apologize to Magic Johnson. Apologize to the NBA, the fans, the black community, the world at large. And respect the wishes of the NBA -- put the team up for sale. Take some of the profits and donate them to a good cause.'"

ESPN.com's Marc Stein and The Associated Press contributed to this report.

Kings Owner Expects Unanimous Vote
Kings owner Vivek Ranadive says he would be surprised if the Board of Governors' vote to remove Donald Sterling as owner of the Clippers isn't unanimous.

Timetable For NBA Board Of Governors Vote
Marc Stein discusses the timetable for the NBA Board of Governors to vote for Donald Sterling to sell the Clippers and the possible transfer of power within the Sterling family.