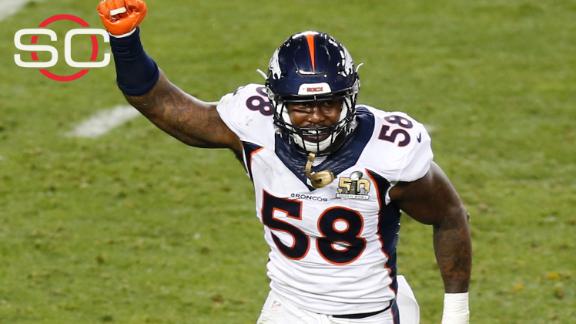 But when it came time to share the photo on social media, Miller was intentional in his decision to crop Elway out of the image, sources told ESPN's Adam Schefter.

Miller is upset with the way negotiations with the Broncos have gone and how public they have become, sources said.

The Broncos have offered a six-year, $114.5 million deal to Miller that includes $39.8 million guaranteed over the first two years plus another $19 million guaranteed going into Year 3, sources said. The sides are not negotiating at this time, sources close to the team told Schefter.

The team has a July 15 deadline to reach a deal or Miller will be locked into hisone-year franchise tender worth just over $14 million.

Miller was optimistic during the Washington, D.C., visit Monday, saying his representatives and the team had made "real progress'' toward a long-term contract.

The Broncos are scheduled to have a ring ceremony Sunday in Denver at Sports Authority Field at Mile High. It is uncertain whether Miller will attend, sources said.

LIVE | At least 6 shot in 3 locations throughout Brooklyn: NYPD