Why Oregon's Sabrina Ionescu is so good -- and where she still must grow? 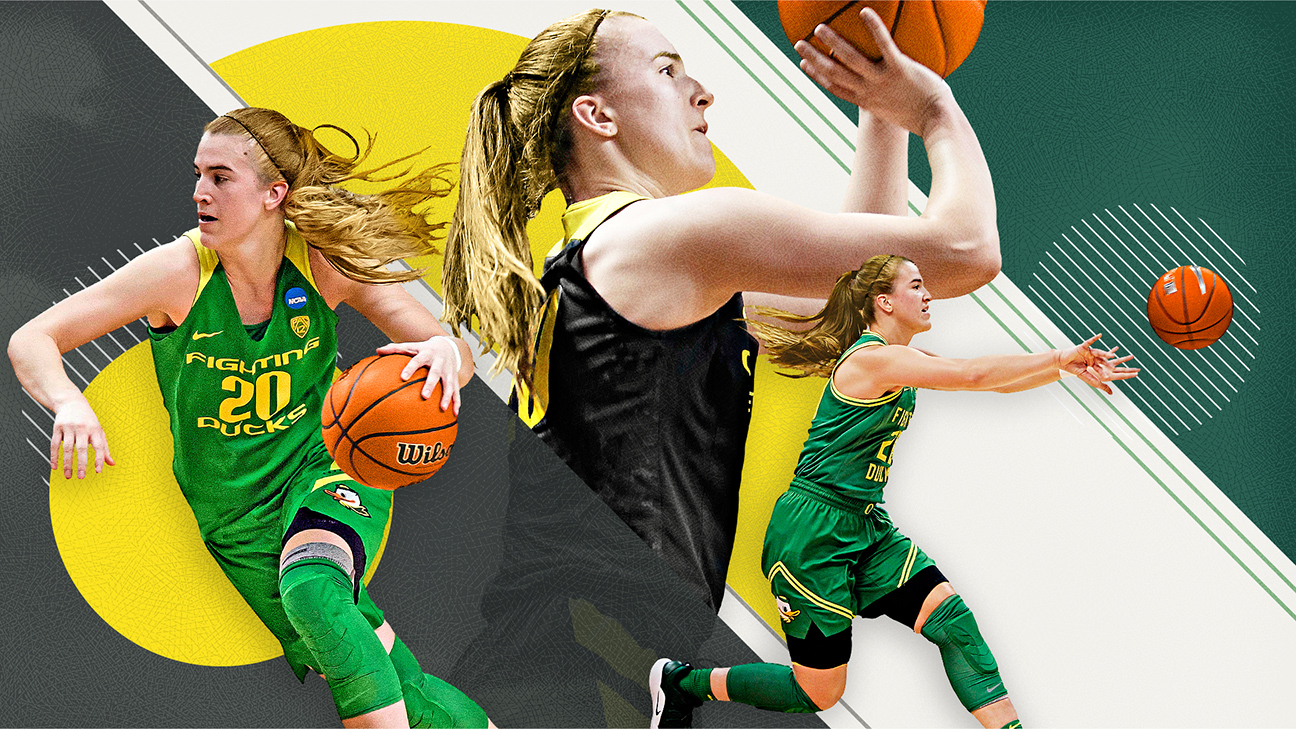 How do the best break down Sabrina Ionescu's game, and how does she see herself?

Ionescu, who has an NCAA-record 22 triple-doubles in her college career, is focused on trying to lead the sixth-ranked Ducks -- who host No. 3 Stanford on Thursday (ESPN/ESPN App, 9 p.m. ET) -- back to the Women's Final Four. But what makes her so good, and what will make her so valuable at the next level?

We asked Sue Bird and Diana Taurasi, two of the best guards in the world, Oregon coach Kelly Graves and WNBA scouts.

Ionescu is known for triple-doubles, but her passing is the biggest key

"I'm definitely a pass-first point guard," Ionescu said. "Sometimes it's hard because I'll pass up some shots I should be taking to try to get my team more involved. I'm still working on that, and trying to get the best shot for our team. I think our team has done a good job of taking our best shot as a team, and that's helped me with my decision-making."

"When you can pass, and make people around you better every game no matter how you're shooting, that's when you can play on any team in the world," said Taurasi, a four-time Olympic gold medalist, three-time WNBA champion and three-time NCAA champion who's on a short list of the best ever. "Whether you're talking about WNBA, overseas, the Olympic team. That's kind of gotten lost in the age of highlights. The simple pass isn't going to be a highlight, but that's the skill that's going to keep you in the league for a long time."

Taurasi said there is a split-second difference between a great passer and an average one.

"If it's too late, it's a turnover or the pass isn't there," she said. "And she always makes that quick decision. I can see it in her."

Ionescu credits some of it to film study, but it's also instinct.

"I watch a lot of film, so usually I try to see how they're playing defense and reacting, really studying the personnel and knowing the right reads," she said. "I feel like the game usually slows down enough for me to read and react quickly."

The rebounding part of the triple-double is typically considered the hardest part for guards. But Ionescu is averaging 9.1 rebounds this season.

"Trust me, 10 rebounds in college will go down to four or five in the WNBA," Taurasi said. "That's just how it is: You're talking about the most physically imposing players. So will that dynamic change a little? Yeah, but she still has a knack for the basketball."

Physicality, defense will be her biggest struggles at the next level

Ionescu had 30 points and seven assists in Oregon's upset of the U.S. women's national team in November. It was an impressive performance. But ...

"The pro game of bigger, faster, stronger is going to be an adjustment for her," a pro scout said. (WNBA head coaches and assistants aren't allowed to comment publicly on prospects while they're still in college). "She'll need to work more to get the ball, get open. She's such a great passer, but more of her passes will be deflected. She'll have to navigate the way she plays in the pick-and-roll system. Because there will be different ways to defend her.

"But her willingness to do hard things, to step up at key times ... those are what make for special players and put them in that next category of elite."

Ionescu said she added about 15 pounds over the summer and worked on strength training. Through 15 games, she is averaging 16.3 points and shooting 48.2% from the field.

"In our league right now, there's not a good comparison, because she does everything: She shoots the 3, she assists, she rebounds," a scout said. "Defensively she's going to be OK. It's not a value, but she's competitive and she doesn't want to be a weak link. And positionally, she's coming into the league at a time when there's somewhat of a void at her spot."

Taurasi, a lock as a future Hall of Famer, jokes that she has never stopped hearing criticism of her defense and foot speed, and knows Ionescu probably will hear that, too.

"There are certain things that physically you can't do that other people can. That's life," Taurasi said. "But can she trump that with her exceptional passing, and becoming a more consistent knock-down shooter? Yes. And having a coach that is going to accentuate her strengths like [Kelly Graves] has in college.

"That's one of the biggest things when you go to the pros: What is a coach going to do with the things you do really well, as opposed to nitpicking on what you're going to struggle with? Because in the years to come, you'll make those weaknesses not as glaring."

The New York Liberty, who hired Walt Hopkins last week as their head coach, have the No. 1 pick in the WNBA draft.

She's a leader with the ability to influence others

A pro scout said for all of Ionescu's obvious basketball skills, a so-called "intangible" part of her game really stands out.

"Her passion, and ability to kind of command her team and hold people accountable," the scout said. "That's really valuable."

Graves said that early on in her career, Ionescu sometimes struggled with demanding accountability in a way that got the best results. But she has made big strides, something both Bird and Taurasi have talked about as being an acquired skill over their careers.

"There's a lot of pressure on her to carry her team, and she seems fit for it," said Bird, a four-time Olympic gold medalist, three-time WNBA champion and two-time NCAA champ. "But that isn't easy. It takes some finesse at times."

Graves said this is an area in which that Ionescu knows she's still growing.

"One of her questions to Diana was, 'How do you get the people who might not be as motivated or dedicated up to that level?'" Graves said. "And Diana said, 'You have to understand that everybody is at different levels.'

"Sabrina has done a much better job of trusting her teammates in big moments. Sometimes she wants to put it all on her shoulders. And how can you fault her for that?"

Still, Graves pointed to last season, when starting post player Ruthy Hebard was dealing with an injury, and the Ducks lost a couple of games.

"Sabrina asked her teammates, 'What do you guys need from me?'" Graves said. "That showed a lot of maturity. She wanted their input. She asked for the team's help, and after that we went on a roll."

Said Ionescu: "Having a better relationship with my teammates has helped me, because we've learned a lot about each other."

Those in the WNBA say it really matters how intensely and consistently competitive a player is, especially with only 12 teams and so much talent on each squad.

"She's very relentless," Bird said. "Even when you think you have her stopped, she keeps coming at you. Those are things you can't always teach. People are going to talk about, 'Is she a good enough shooter? Can she do this? Is she good enough for that?' Who cares? If you're competitive, that can overcome a lot."

Graves said he sees it every day in practice from Ionescu, and he was thrilled that she got to spend some time talking to Taurasi, in particular, when the USA team was in Eugene, Oregon.

Taurasi said one of the similarities she sees between Ionescu and herself is "an immigrant mindset." Taurasi's parents came to the United States from Argentina (her father originally was from Italy) and Ionescu's parents both immigrated from Romania.

"Maybe your parents don't necessarily speak English really well when you're a kid, and you may have to do some things other kids don't," Taurasi said. "But you see your parents just going to work every day, working hard. You take that on: You want to prove to everyone that you belong. That stuff comes out in you. I know I still have that chip on my shoulder."

But that competitive mindset must be balanced by self-care. Graves worries about Ionescu diving for loose balls without thought to her body, and how difficult it is to keep her from working too hard.

"When we try to limit her reps in practice, she'll try to sneak her way back on court," he said. "It's like, 'Kid, you've got to rest sometimes.' She's done a better job of eating better, sleeping better. But I talk to her in terms of, 'You're not just playing for this season, but for a long professional career. You've got to take care of yourself.'"

Bird, whose emphasis on fitness, diet and proper rest has helped her extend her career to age 39 and beyond, echoed those sentiments. And Ionescu is listening, even if it's a challenge for her to dial it back.

"Working on strength and balance is something I've tried to take to the next level," Ionescu said. "And obviously everything outside of the court: Eating right, sleeping right, taking care of my body, cool-tubbing.

"I'm going to play hard regardless; there's never a time I won't dive for a loose ball. But I definitely don't put myself in a position of harm, trying to be mindful of taking care of my body."
Report a correction or typo
Related topics:
sportsespnwnbaoregon ducksnew york libertywomens college basketballespnw sportsespnw
Copyright © 2021 ESPN Internet Ventures. All rights reserved.
More Videos
From CNN Newsource affiliates
TOP STORIES