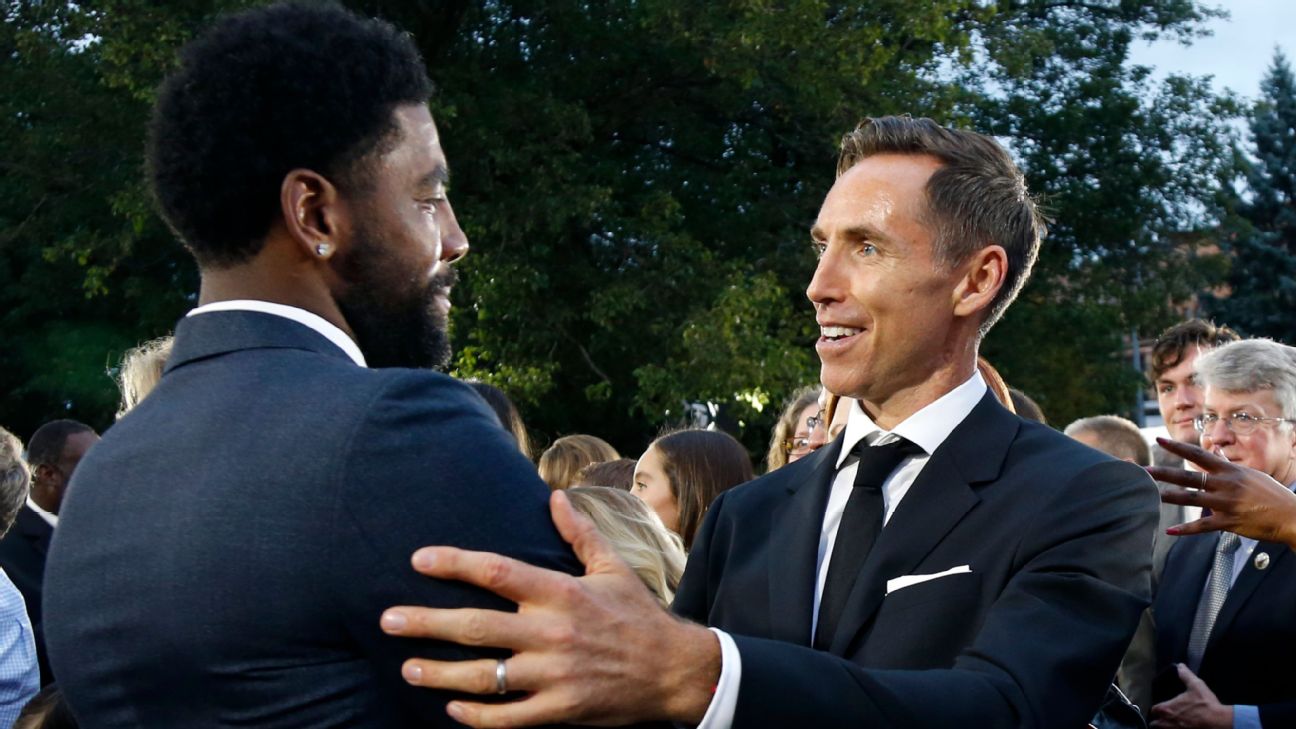 The call landed late on Wednesday night in San Francisco, Sean Marks reaching out to Golden State's Bob Myers to tell him the Brooklyn Nets had recruited one more MVP from the Golden State Warriors. This time, Steve Nash. The Nets GM made a leap that Myers had made twice in searches: hire a coach who'd never coached.

As a Warriors player development consultant these past five years, Nash had an infrequent presence in the franchise facility. At times, he played the part of a workout partner and confidant, a rebounder and basketball Yoda. Every time Nash walked onto the court, Myers said, there generated something of a static energy.


For the Hall of Fame point guard, this was far more of an introduction than an immersion into high-stakes coaching. Afforded a window into how Steve Kerr approached the job with no formal coaching experience, into what moved Kevin Durant as a player and person, Nash can take elements from his Bay Area experience that could prove instructive in Brooklyn.

"Steve got to audit the class before he gets to teach it," Myers told ESPN.

Myers and Marks share a strong professional and personal respect, reflective of how they can separate the competition and the humanity. In Myers' mind, there has never been a reason to treat the Nets like some kind of pillager. The Warriors lost Durant to Brooklyn in free agency, just the way they had gained him from Oklahoma City: on the whim of KD's wanderlust, a search for something else. The Warriors won two championships with Durant -- perhaps losing a third upon the snap of his Achilles.

Fourteen months later, Myers sees the value in the Nash hiring as Brooklyn's coach, and told Marks as much on the call.

"Steve Nash has the ability to walk out onto the court and earn the immediate respect of Kevin Durant or Steph Curry or Klay Thompson -- and there aren't too many people in the world who can do that," Myers told ESPN. "More than that, though, he can communicate with them effectively and efficiently.


"There's so much value in the little things, the small details that he can share to guys at that level. There's not a lot of teaching left for the most accomplished players in the world. Steph is not going to listen to many people about his jump shot. Steve might be one of the only people in the world outside of Dell [Curry] that he'd give an audience on that conversation."

For a head coach, though, that kind of connectivity on high-end basketball matters evaporates quickly without the complete embrace of the job's broader elements. No one will care that Nash can still get a letter or two on his stars in HORSE after practice, and Nash knows that better than anyone. These Nets and Nash should be chasing the high 50s, low 60s in regular-season victories, but ultimately they will be judged on Eastern Conference playoff successes, on adjustments and execution in postseasons against Erik Spoelstra and Brad Stevens, Nick Nurse and Mike Budenholzer.

In the end, the players have to believe that Nash is obsessive in detail and preparation, elevating them in the narrowest margins of postseason basketball. The arduous hours that go into that pursuit is the part of himself that Nash had to shut down upon retirement in 2015. He worked endlessly to evolve from a starter to an All-Star to a two-time MVP, and he needed to step back. It took him several years to come to a decision to rev all that up again. As much as anything, that was the choice he had to make to come coach the Nets.

"I think he was trying out life without a big job in basketball, without the scrutiny, to see what it felt like to have to have some space and breathe again," Myers told ESPN. "I believed he would eventually do something like this, because he has so much to give -- his intellect, experience, ability -- and he'd want to share that knowledge."

Most of all, Marks hired Nash because he believed he could construct genuine relationships away from the gym, construct a culture. Everyone talks about it, but few do it. The Nets built one culture with Marks and Kenny Atkinson, the young draft picks and spare-part veterans who elevated the franchise to profound respectability around the NBA. This is a different owner and different stars and a different burden. There is extraordinary talent on these Nets, and extraordinary challenges to harness it. Nash has a reputation as one of the gatherers of people. That will be tested here.

As immortal talents go, Nash's story is unique. In the sport's history, no one else ever became an MVP in his 30s after spending some of his 20s in struggle. This guarantees Nash nothing, but it gives him the capacity to connect and empathize. Winning over Durant and Irving is one thing, but an NBA roster is deep, and so are the demands throughout it.

"He's the best team builder I've ever been around," Marks, a Nash teammate in Phoenix, told ESPN. "He had an incredible empathy for a guy like myself, the 15th man on the roster, or Raja Bell, who was right next door to him in the lineup. As [owner] Joe Tsai mentioned before, 'We need a conductor.'

"That's exactly what we need here, and Steve's the right guy."

That's the Nets' bet and Nash's burden. When he walks into the gym, it'll be electric in Brooklyn. And then Steve Nash will have to go to work and become the coach of Kevin Durant and Kyrie Irving and these Nets. 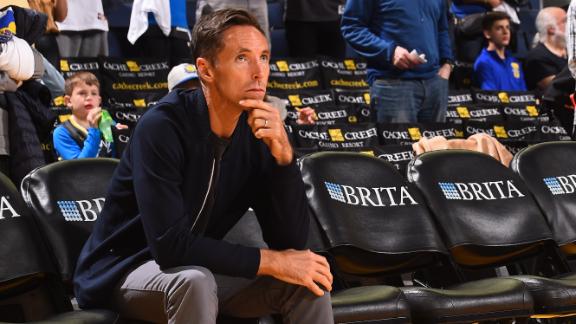