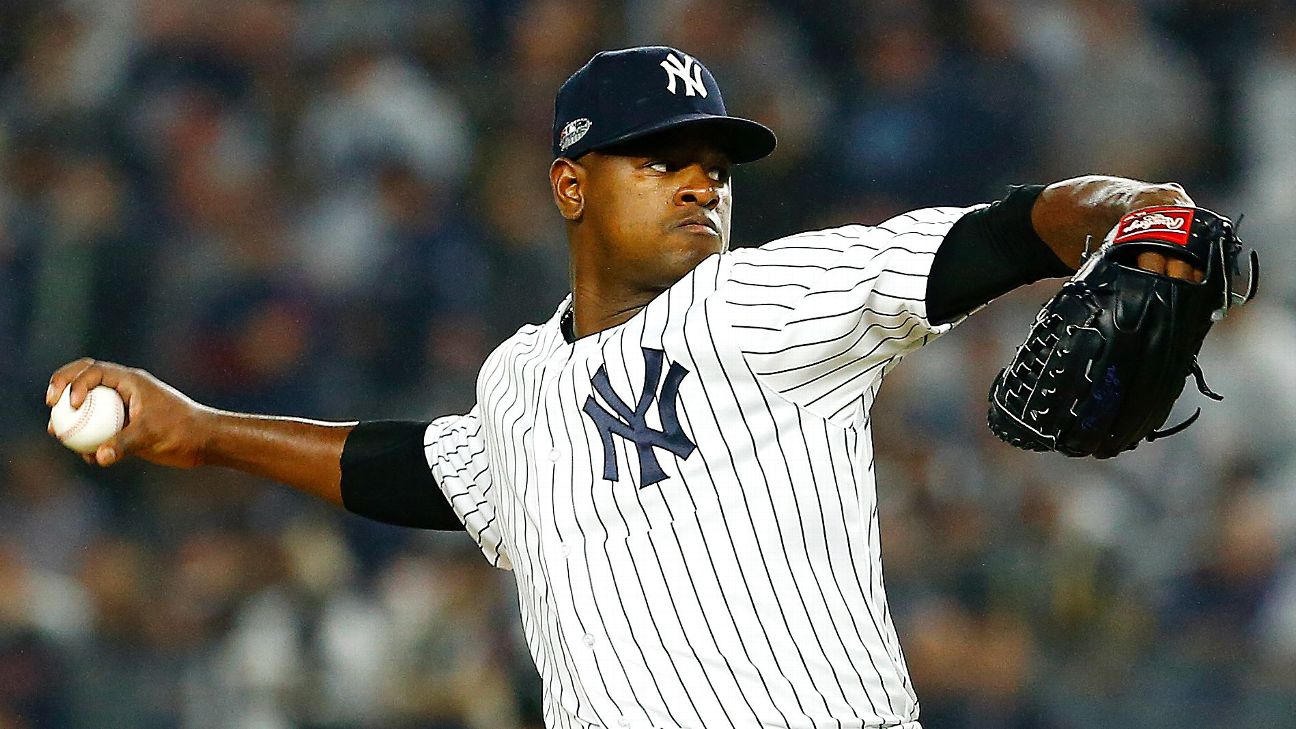 That decision and another similar one may have cost his team a chance at winning the series over the Boston Red Sox, Boone acknowledged.

"I probably got a little greedy," Boone said, referring specifically to letting Severino continue pitching in the fourth inning of Game 3 despite having run into trouble in the inning prior, when he gave up three runs.

When he came out for the fourth, Severino faced the bottom third of Boston's lineup. He allowed all three batters to reach -- two via singles, one by way of a four-pitch walk -- loading the bases.

At that point, Boone removed him, inserting starter-turned-reliever Lance Lynn, who allowed each of the inherited baserunners to score. All of this preceded Boston's eventual 16-1 win. From there, the Red Sox eventually beat the Yankees in four games to advance to the ALCS.

"I should've had him out of there," Boone added about his 24-year-old ace. "I sensed he wasn't on top of his game. I felt like they were having a lot of good swings against him."

Those comments echoed others Boone made just prior to Game 4 on Tuesday.

"Certainly in hindsight, when he doesn't get an out, I'd like to have that back," Boone said then. "Being able to look back in hindsight, sure, go in a different way there in that spot."

He hadn't been hit that hard since May 19.

In an interview Friday on "The Michael Kay Show" on 98.7 FM in New York, Yankees owner Hal Steinbrenner praised Boone for his sincere willingness to learn from the mistakes he made this season, but was also critical of his decision to stick with Severino.

"There were too many signs," Steinbrenner said. "I'm not a baseball guy, but I can tell when a guy is getting hit hard, right? Even if they're outs. It just seemed like he didn't have his stuff, and it might have been time at that point to make a change."

With reports suggesting Severino may have been tipping his pitches in Game 3, the Yankees acknowledged Friday that they had noticed issues with that at times during the season.

Beyond the issue of staying too long with Severino, Boone has fielded criticism in recent days regarding his similar decision of not taking out starter CC Sabathia when he got in trouble in the third inning of Game 4 a night later.

Like with Severino, Boone left Sabathia in the game because he felt the lefty could get out of a trouble-filled third by pitching through the bottom of Boston's order. Unlike with Severino, though, Sabathia was replaced at the start of the fourth.

"Those are the decisions, especially in the postseason, that I understand come under the microscope. It's a little bit gray," Boone said.

Had he gone to his bullpen during the third inning, Boone believed he could have set up his bullpen for more extended work than it needed to endure.

"Maybe we're leaving ourselves a little short going forward with a guy that I didn't think was overly off his game in CC," he added. "Those are the close decisions that in a way cost us, because that was the inning that ultimately we weren't able to overcome."

"He took a shot, and that's what managers do," Cashman said. "They make decisions based on a lot of different things that are going on. He's got personnel lined up with him down there that are experts in the field, as well.

"He took a shot to get through certain aspects to stretch it. Because he felt it would benefit us moving forward, and if it worked, then obviously the accolades come, and if it doesn't work, they don't. That's the definition of a manager, especially in the postseason."

The Yankees announced Friday that Sabathia underwent surgery earlier in the day on the arthritic right knee he had a procedure on last year.

The 38-year-old's surgery won't have any bearing on the decision to possibly bring him back via free agency, Cashman said. Sabathia has indicated he isn't ready to retire, and wants to play at least one more year regardless of whether or not that's in New York.

"It's more of a clean-up to put him in a position to be the best he can possibly be," Cashman said. "The expectation is he'll be full-bore, ready to go, and the same type of pitcher he's been, which has been successful. He's had an amazing career and has a chance to continue."

One pitcher the Yankees likely won't have in 2019 is Sonny Gray. The Yankees are open to trading him, Cashman said.

The embattled right-hander struggled in the Bronx after coming over during last year's non-waiver trade deadline.

"It hasn't worked out this far," Cashman said. "We'll enter the winter, unfortunately, open-minded to a relocation. To maximize his abilities would be likely best somewhere else.

"Someone, if they trade for him, is going to get the player that we wanted. And if and when that happens, I fully expect that. It just hasn't worked out here. It wasn't because he wasn't trying to be the best he could be. But for whatever reason, it just didn't play well, and it got on the wrong side of the mountain, and the momentum of negativity in terms of performance kept going and we couldn't stop it."

As is the case with other player personnel moves -- Cashman did say he's planning on retaining the entire coaching staff -- the Yankees have not yet had any conversations with teams regarding offseason trades.

"I've got nothing cooking, but I will plan on doing some cooking, if I can over time, for his sake and ours," Cashman said. "It's all in there still. There's no health issues and stuff. It's just sometimes things happen along the way, and we've had that, unfortunately."