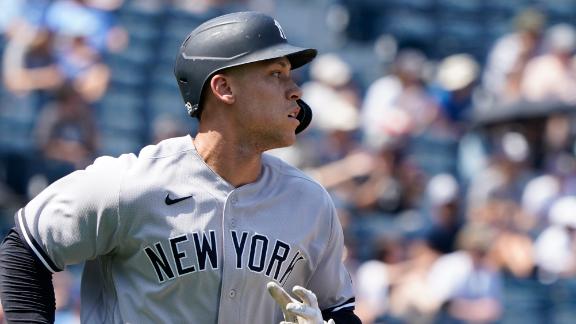 KANSAS CITY, Mo. -- - Luke Voit had a two-run single in New York's three-run first inning and the Yankees beat Kansas City 5-2 on Wednesday for their 12th straight series victory over the Royals.

Chad Green (6-5) got the victory in relief as New York took two of three from Kansas City. Zach Britton earned his first save of the season.

"There were a lot of good things happening today," Yankees manager Aaron Boone said. "Obviously, all the bullpen guys came up big for us. To throw a three-spot in the first was huge.

"Overall, we didn't play very well today, and we're fortunate to get out of here with another win."

"It was one of those starts where he wasn't sharp," Kansas City manager Mike Matheny said. "He couldn't locate the fastball. He had pretty good movement, but his slider didn't have the bite he wanted. He was in a mess every single inning."

Yankees starter Lucas Luetge made his first career start after making 152 career appearances as a reliever. He allowed one run on two hits in two innings. According to Elias, Luetge was just the sixth pitcher in franchise history to start a game after making his first 152 appearances out of the bullpen.

"It was definitely different," Leutge said. "I had to change my whole routine from what I was used to. It was a little nerve-wracking. It was something we knew was coming with a bullpen day. I knew when I didn't pitch last night it was a possibility, so I was a little prepared for it."

The Royals answered with one in the bottom of the first. Whit Merrifield led off with a single, then had his major league-leading 33rd stolen base. He went to third on a wild pitch and scored on a groundout by Salvador Perez.

Merrifield tied the Royals' record with his 33rd consecutive steal (Carlos Beltran, 1999-2001). Merrifield was caught stealing on his first attempt this season and hadn't been caught since. The streak was snapped in the seventh when he over-slid second.

The Yankees lead the majors with 22 stolen bases since the All Star break, including two Wednesday from Tyler Wade.

"It's definitely a different dynamic," Boone said about the team's baserunning. "It's a different element at times we haven't had. We try to take advantage and (Wade) has done a really good job of that."

The Royals scored their second run in the fifth. Cam Gallagher led off with a double and went to third on a flyout. He scored on slow roller to short by Nicky Lopez.

Prior to the game, the Yankees placed RHP Clay Holmes on the COVID-19 injured list (pending the results of a Covid test). The Yankees recalled RHP Brooks Kriske as a replacement player from Triple-A Scranton/Wilkes-Barre.

Royals RHP Brady Singer was reinstated from the 10-day Injured List. RHP Joel Payamps was optioned to Triple-A Omaha in a corresponding move.

The Yankees will travel to Dyersville, Iowa, for the "Field of Dreams" game against the Chicago White Sox. The game will be played at the site of the 1989 hit movie "Field of Dreams." LHP Andrew Heaney (7-8, 5.45 ERA) will get the start for the Yankees vs. RHP Lance Lynn (10-3, 2.04 ERA) for the White Sox.