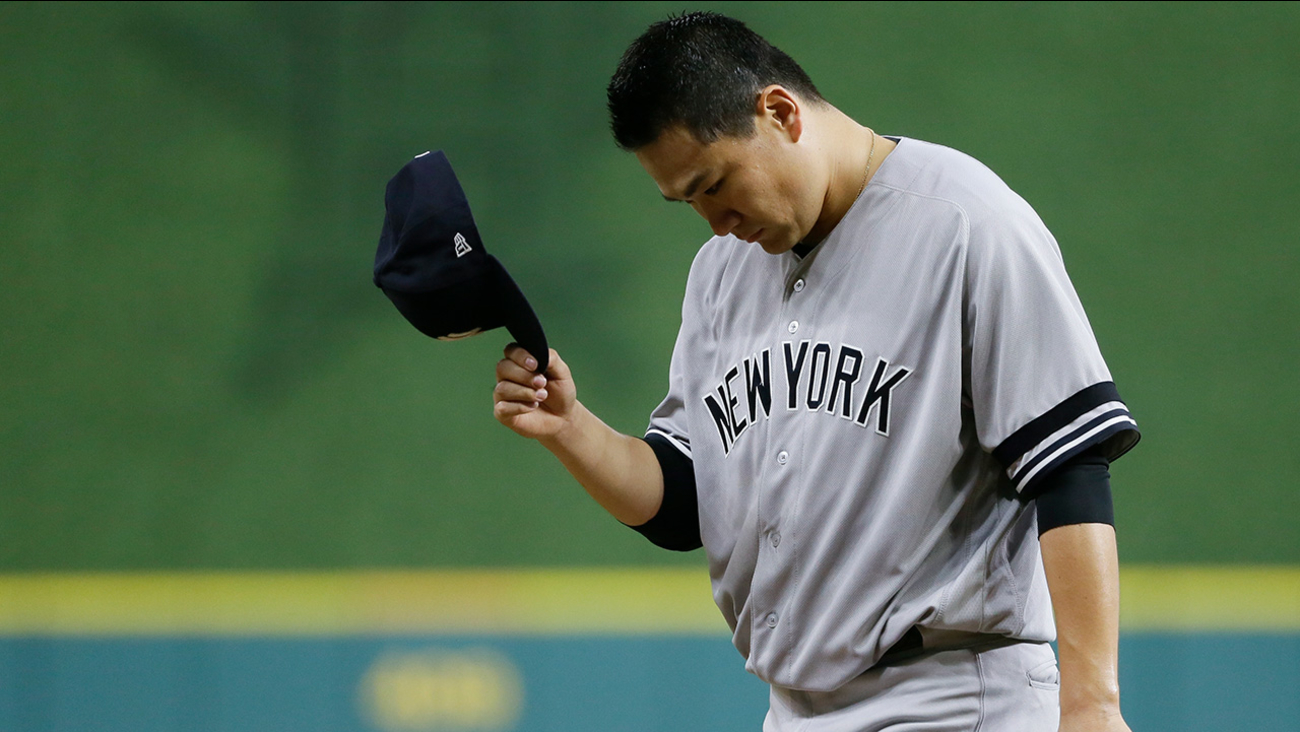 Yankees starting pitcher Masahiro Tanaka walks back to the dugout after the Astros scored two runs during the fourth inning of Game 1 of the ALCS Friday, Oct. 13, 2017, in Houston. (AP Photo/Tony Gutierrez)

HOUSTON, Texas -- Dallas Keuchel faced the New York Yankees in the postseason for the second time and the Houston Astros ace shut them down again.

Keuchel struck out 10 in seven scoreless innings to help Houston to a 2-1 victory on Friday night in the AL Championship Series opener.

"I think it's just pitch execution, and it's just been there more times than it hasn't against the Yankees," Keuchel said.

He allowed four hits - all singles - and walked one to improve to 8-2 with a 1.09 ERA in eight starts against the Yankees in the regular season and postseason combined. He joined Nolan Ryan and Mike Scott as the only Astros pitchers to reach double digits in strikeouts in a postseason game.

"Late movement - he moves the ball and he commands it well," the Yankees Greg Bird said.

Carlos Correa and Yuli Gurriel hit RBI singles in the fourth off loser Masahiro Tanaka, and left fielder Marwin Gonzalez threw out Bird at the plate trying to score on Aaron Judge's two-out single in the fifth.

"We had a shot," Yankees manager Joe Girardi said. "If Bird's safe maybe we really get to him in that inning."

Bird homered off Ken Giles with two outs in the ninth, and the closer struck out pinch-hitter Jacoby Ellsbury . Giles, who threw a season-high 37 pitches, escaped a two-out jam in the eighth by striking out Didi Gregorius .

Greeted by MVP chants each time to the plate, Jose Altuve had three more hits and at 11 for 19 (.579) has the most hits in a team's first five postseason games since Seattle's Ichiro Suzuki in 2001.

Houston is in the Championship Series for the first time since beating St. Louis in 2005. The Yankees, who overcame a 2-0 deficit to beat Cleveland in the Division Series, lost their sixth straight ALCS game since 2010.

After the Astros totaled eight runs in the first innings of their four AL Division Series games, Tanaka kept the Astros hitless until Altuve's infield single rolled through the pitcher's legs in the fourth. Altuve swiped second before scoring on Correa's single. Gurriel followed with a two-out single, his 10th hit of the postseason.

Bird singled to start the fifth and Matt Holliday, making his first appearance of the postseason, reached when Altuve dropped his slow bouncer to second for an error. Judge singled with two outs and Gonzalez, throwing with such force that he fell to the ground, made a 97 mph one-hop throw to catcher Brian McCann, who tagged the sliding Bird.

"That was their best moment in the game, (I needed) to stop the momentum," Gonzalez said. "All I was thinking was to go get the ball as fast as I could."

The call was confirmed in a video review.

Primarily an infielder, Gonzalez had just two outfield assists in the regular season. He beat his hand into his glove three times in celebration after watching McCann make the tag.

"It's one of the best throws I've ever seen from an outfielder," Correa said. "Long hop, low tag right there. It was just perfect. Unbelievable."

Gonzalez threw out Boston's Mitch Moreland at the plate in the Division Series finale and is the first outfielder with assists in consecutive postseason games since Jim Rice in the 1986 World Series. He joined Lance Berkman as the only players in franchise history to have two outfield assists in one postseason.

After controversially failing to challenge a call in Game 2 of the Division Series, Girardi didn't hesitate to ask for a review.

"We thought he was out," he said. "But God knows I'm not doing that again."

Yankees: Luis Severino will make his third start of this postseason on Saturday. Severino yielded three runs and four hits in seven innings of a win in Game 4 of the ALDS to bounce back after allowing three runs and getting just one out in the wild-card game.

"I feel good, I feel confident in myself," he said. "I knew that that first start I did, that wasn't me, and I made adjustments. That's how we do it; we make adjustments and the second start I put in place those adjustments and did good."

Astros: Justin Verlander is scheduled to make his 18th playoff start on Saturday. Verlander got the win in Game 1 of the ALDS against the Red Sox and picked up win No. 2 of this postseason when he made his first career relief appearance in Game 4. He's 9-5 with a 3.36 ERA and 115 strikeouts in his postseason career.

Manager A.J. Hinch announced that Charlie Morton will start Game 3 and that Lance McCullers, a starter who pitched in relief in the ALDS, could pitch Game 4. The Yankees will start CC Sabathia in Game 3 and Sonny Gray in Game 4.
Report a correction or typo
Related topics:
sportsmlbbaseballhouston astrosnew york yankeessports
Copyright © 2020 by The Associated Press. All Rights Reserved.
More Videos
From CNN Newsource affiliates
TOP STORIES