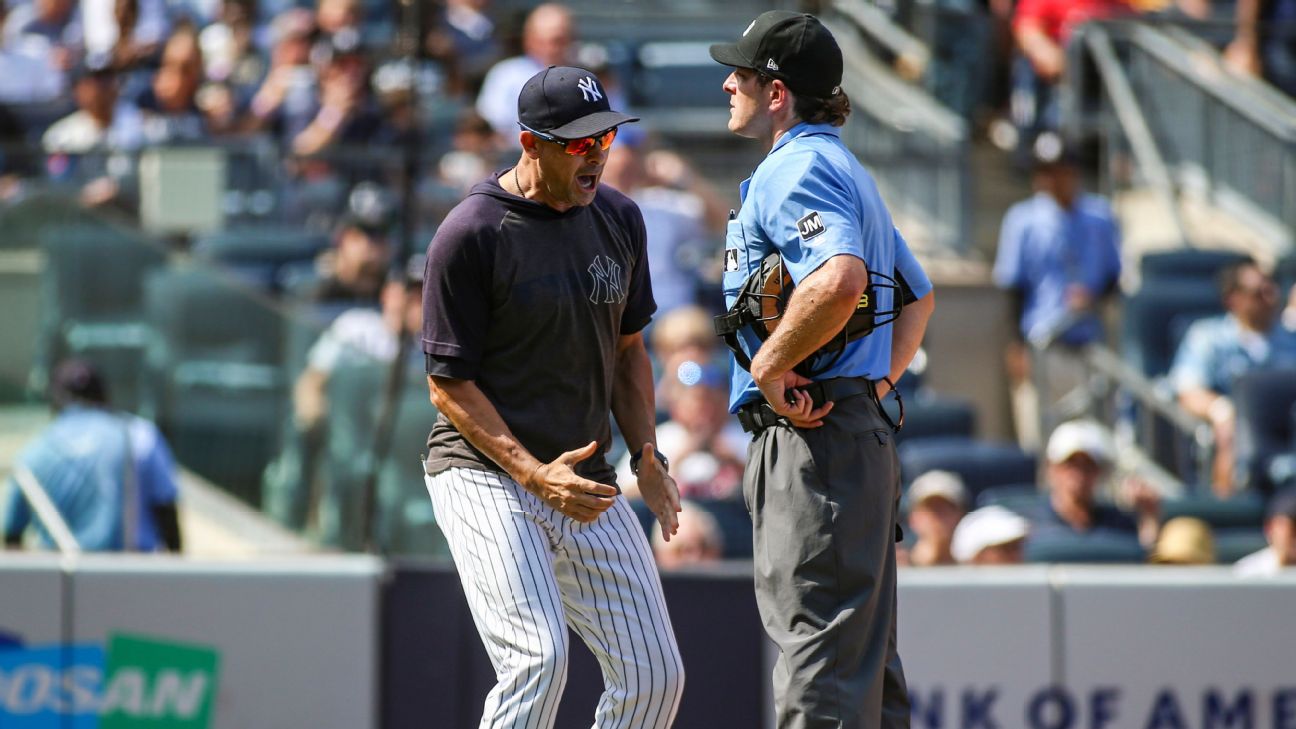 NEW YORK -- Manager Aaron Boone, outfielderBrett Gardner and the New York Yankees again hammered away at the umpires Saturday, this time in prolonged rants that brought several members of the team spilling onto the field, while beating the Cleveland Indians 6-5.

For the third time in a month -- each time with a minor league call-up umpire behind the plate -- the team with the best record in the American League lost its temper in a big way. This episode led to Boone and Gardner as well as pitcher CC Sabathia, who is on the injured list, all being ejected.

The trouble began in the sixth inning after Triple-A ump Ben May called outCameron Maybinon strikes. The final pitch to Maybin was, according to strike zone charts, a bit outside. He calmly stood and discussed it with May and went back to the bench.

Moments later, things heated up in a hurry.

Boone came rushing from the dugout to confront May and engaged in an animated argument. When Boone returned to the bench, all seemed calm -- for a moment, anyway.

That's when Boone came back for another go at May, with crew chief Tom Hallion coming in from second base, trying to quell the beef. But at the same time, several Yankees were hollering from the dugout, engaging in a close-up argument with first-base ump Phil Cuzzi.

"Just in that couple innings, obviously we objected to a few calls," Boone explained after the game. "I start in there not wanting to get one of our guys if I can out of that game, but you know I had some issues where I felt like something might have affected another, might affect [James] Paxton being in that game, so just voiced it."

Gardner was then ejected after banging his bat against the dugout ceiling -- something he has done in the past -- and then he climbed over the railing to continue the dispute with Cuzzi. Coaches Phil Nevin, Marcus Thames and Josh Paul also were on the field holding back Gardner, who was also arguing with third-base umpire Todd Tichenor.

"Kinda crazy to be honest," Gardner said. "Got ejected for hitting the top of the dugout with my bat, making too much noise, I guess. I wasn't happy about it, I didn't feel like what I did warranted an ejection."

Boone said he thought the umpires were looking for Gardner to repeat his previous assaults on the dugout.

"I think in this case, in kind of talking with Gardy and watching it back, I think it's clearly something they were probably looking for with us," the manager said. "I haven't received any memos or anything saying that's illegal. Gardy was saying nothing again other than, 'Hey, this is a spot in the game, we're fired up, we're playing for a lot,' and we get a little passionate in that dugout in spots, and Gardy I don't think was doing anything more than that."

Boone added that on the topic of hitting the ceiling, the Yankees would "work closely with the commissioner's office and find out what's acceptable and not and try and certainly be respectful of that, and try and do a better job of staying in the game."

Gardner said he believes any potential rule limiting players' ability to express themselves from the dugout would not be good for the sport.

"I guess if we're trying to make the game fun again, like a lot of guys say the last few years -- I don't think you want all the guys sitting in the dugout not being able to say anything or make any noise or anything like that," Gardner said. "That wouldn't be too much fun. I'm not saying what I did was right. ... But I probably wouldn't do it again tomorrow."

It was Gardner's sixth ejection of his career and second in a little more than a week.

On Aug. 9, Gardner was tossed after an incident in Toronto in whichplate umpire Chris Segal heard some words from the dugout and singled out the outfielder. Gardner had been silent at the time but earlier had been slamming his bat into the ceiling of the dugout.

On July 18, Boone screamed and hollered at another rookie umpire, Brennan Miller, leading to the expletive-filled rant that prompted the manager to call his hitters "savages" in the batter's box. That netted him a one-game suspension.

These frustrations have come as the Yankees are running away with the American League East, holding an 11-game lead over their nearest rival. 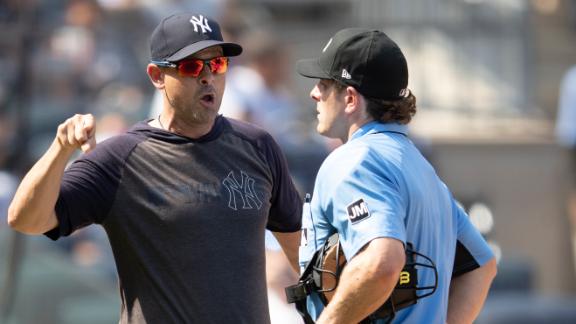 Boone, Gardner and CC ejected in Yanks' win
After Cameron Maybin strikes out, Aaron Boone is ejected for arguing along with CC Sabathia, and then Brett Gardner is tossed for banging his bat on the dugout. 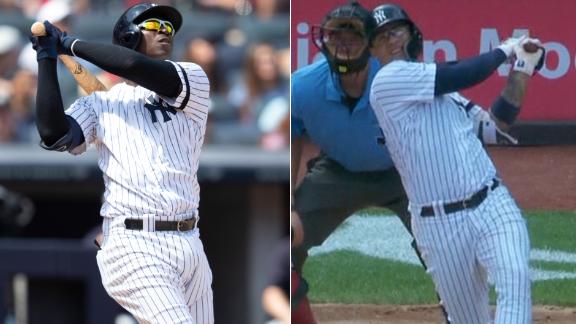