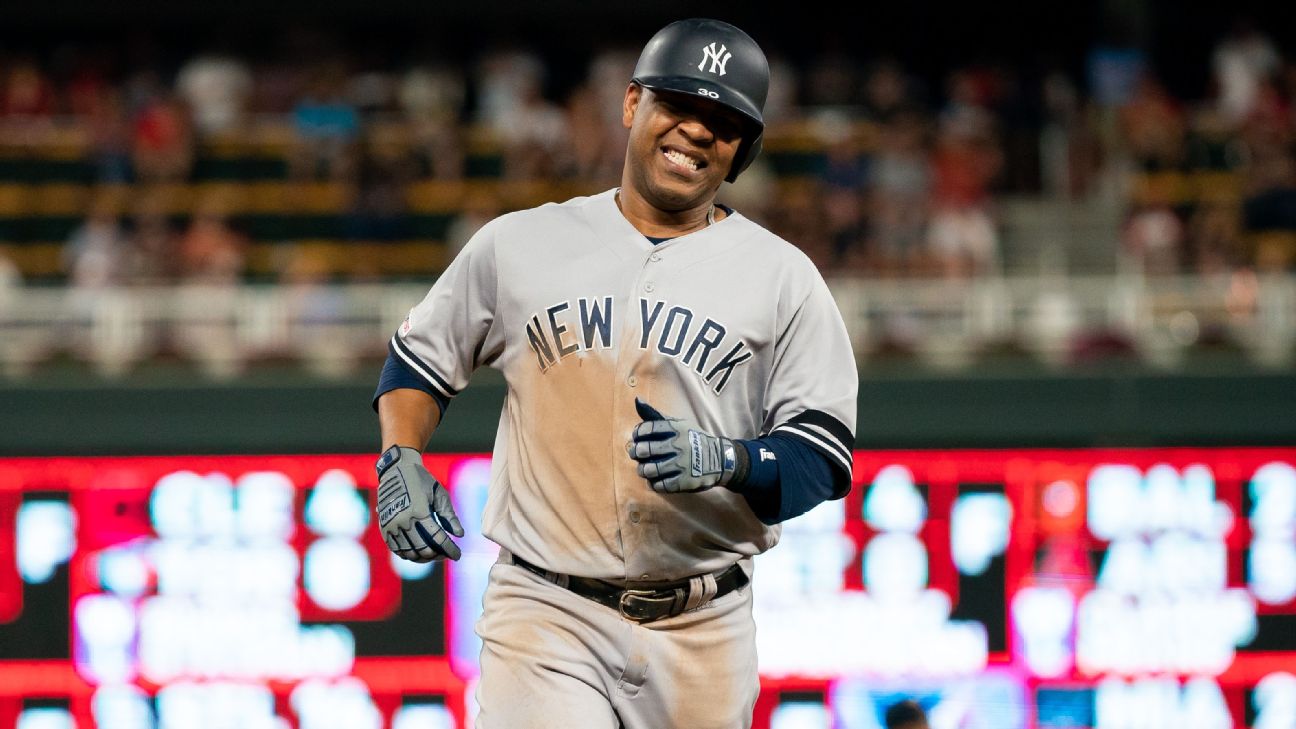 At the time, Urshela was holding a cardboard box, delivered to the ballpark from Amazon. It had been opened just enough for him to see that the right contents were inside. He was pleased they were there.

Later in the evening, as fellow Yankees slugger Edwin Encarnacion finished rounding the bases following his milestone 30th homer of the season, the plush piece that was inside that box was finally shared with the world.

"I've been waiting for that," Encarnacion said, smiling. "It looked nice."

"It" was a stuffed animal -- a red, white, yellow and blue parrot, to be precise -- that had been gifted to Encarnacion near the Yankees' on-deck circle at the end of his ninth-inning round-tripper.

This is now the eighth straight season that Encarnacion, 36, has hit at least 30 homers.

"Thank God for blessing me," Encarnacion said of reaching the milestone again. "But I do the hard work every offseason, and trying to be consistent every year, it's not easy to do it. But thank God I've been doing it the past [eight] years, and I feel blessed."

Encarnacion started the streak when he was 29. But among players beyond the age of 30 to have had 30 or more homers in consecutive seasons, his seven such years rank fifth all time. Only Barry Bonds (10 straight 30-homer seasons), Rafael Palmeiro (nine), Mike Schmidt and Babe Ruth (eight) have had more consecutive 30-homer seasons past age 30 in baseball history.

"That's amazing in itself, and to be able to do that consistently and be a guy that's very productive, it's awesome to see," Yankees center fielder Aaron Hicks said. "He's a great hitter, and he does what he has to do to be able to put barrel on the ball and obviously be able to hit the ball out of the ballpark."

The 385-foot solo shot that Encarnacion deposited into the Yankees bullpen extended their lead over the Minnesota Twins, giving the Yankees a 10-7 advantage that they held onto in the bottom half of the ninth. With Wednesday's victory, the Yankees also won the crucial series in Minnesota, taking two of three from the Twins before visiting the Boston Red Sox for four games beginning Thursday.

Encarnacion's long ball also was the 20th and final home run that the Yankees and Twins had hit in a series that doubled as a veritable two-team Home Run Derby. At 7,875 feet, the teams' combined blasts traveled a distance that is nearly the equivalent of 1.5 miles. That's roughly the same distance as the Empire State Building (at 34th Street) is from Columbus Circle (at 59th Street) in Manhattan.

"Similar to us, they do a really good job of making [a pitcher] come into the strike zone," Yankees manager Aaron Boone said of the Twins. "They have guys that, when you make a mistake, they don't just get hits, they get it out of the ballpark."

Encarnacion's homer, which followed another he hit Tuesday, also came on the same at-bat in which he drilled an off-speed pitch onto the top of his left foot. In obvious pain after the foul ball, he walked back away from the batter's box and toward the on-deck circle, where Boone and head athletic trainer Steve Donohue chatted with him.

The designated hitter told them he was OK and walked back to the box to finish his at-bat. Suddenly, he unloaded on an 83 mph changeup that was down in the zone, sending it over the wall in left-center field.

"It's just sore," said Encarnacion, who also fouled a pitch off the same foot on Monday. "It got me good. It's just been a little sore.

Once the Yankees get a better handle on how Encarnacion feels when he wakes up in Boston, they will have a better idea of how to proceed following the injury.

As he began his home run trot, Encarnacion's jog turned quickly into a noticeable limp. Even his typical home run celebration with a single raised arm looked hindered. Normally, he holds his arm up as he lets his imaginary parrot ride there on the first-to-third portion of his trot. But by the time he got halfway between second and third base, Encarnacion dropped his right arm and proceeded to gingerly run the rest of the way.

"When you hit one off the bunion like that, it's always tough to be able to come back and get it," Hicks said.

It was when he began high-fiving teammates while entering the dugout that Torres handed Encarnacion the toy parrot that had arrived at the Yankees clubhouse earlier in the afternoon. Starting pitcher Domingo German then took Encarnacion's helmet and the parrot from him, and placed them both on the bench next to where the veteran power hitter sat down.

Urshela said the idea behind the toy parrot just came to him as he wanted to have a little fun with his older teammate. 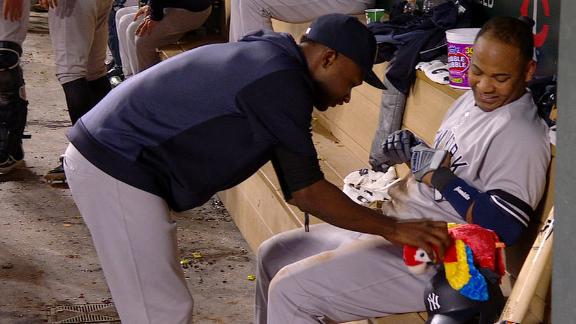