Yanks not counting on CC Sabathia 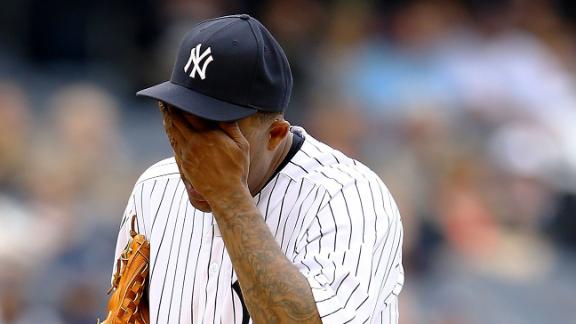 MINNEAPOLIS -- Things escalated quickly for CC Sabathia, who in the span of a few days went from a possible All-Star break return to not pitching again in 2014.

Sabathia suffered a setback on Thursday after waking up with swelling in his right knee, and now Yankees manager Joe Girardi admitted that microfracture surgery is a possibility, adding it's "fair to say" he's done for the season.

"He's going to see Dr. [James] Andrews a week from Monday," Girardi said. "[Surgery] is always a possibility when you have a degenerative knee. I'm not exactly sure if he was to have surgery what it would be, that's yet to be determined."

The Yankees are 23-26 since Sabathia's last start in May. He had a 5.28 ERA in eight starts when he hit the disabled list on May 11. Girardi entertained the notion that Sabathia may not pitch again, at least not in pinstripes.

"I think it's too early to predict that," Girardi said. "But whenever you have degenerative issues that cause surgery or things like that, there's always a little question there."

Sabathia Shut Down Indefinitely
Dallas Braden discusses the Yankees' decision to shut down pitcher CC Sabathia indefinitely because of swelling in his right knee after second rehab start.