Yanks' Stanton to be activated in next two days 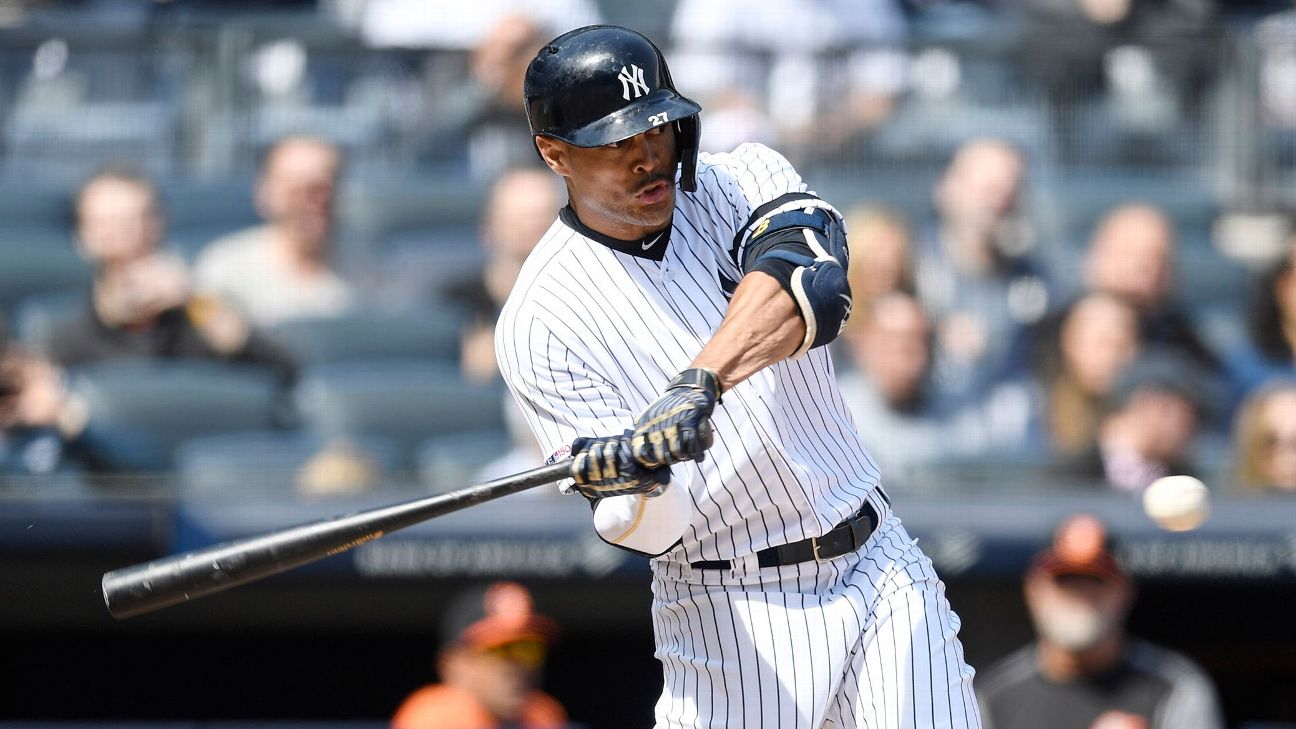 NEW YORK -- Giancarlo Stanton will be back with the New York Yankees on Wednesday or Thursday, hoping to salvage an injury-decimated season.

Stanton has been limited to nine games this year and will see time at designated hitter and left field, an unsettled position for much of the season. The four-time All-Star strained his left biceps on March 31 in his third game, strained a shoulder and calf during his rehabilitation and returned June 18. Then in his sixth game back, Stanton strained the posterior cruciate ligament in his right knee during an awkward headfirst slide into third base on June 25.

Stanton is hitting .290 with one home run and seven RBIs. The 29-year-old, in his second season with the Yankees, had been working out at the team's minor league complex in Tampa, Florida.

"I may build him up a little bit, so he could play a handful of innings and I might pull him," manager Aaron Boone said Tuesday before the AL East-leading Yankees open their final homestand of the regular season. "He's racked up a lot of at-bats. He's done all his defensive work. He's really been bouncing back well the next day, feeling like his knee is where it needs to be. He's been doing his baserunning and all his agility and conditioning. And the amount of at-bats that he's been able to rack up, I think, has him feeling good."

Brett Gardner made his 85th start in center field, shifted from left because of injuries to Aaron Hicks. After hurting his back during spring training batting practice on May 1, Hicks didn't play his first game until May 18. Then he strained the flexor near his right elbow while making a throw on Aug. 3 and does not know whether he will need Tommy John surgery. Hicks is in Tampa.

"He is in the early stages of a throwing program," Boone said. "Where that takes him and us we'll just have to see."

Mike Tauchman made 55 starts, but sustained a season-ending left calf strain on Sept. 8, the Yankees' 30th player on the injured list. Cameron Maybin made his 35th start in left on Tuesday. Clint Frazier would leave the Yankees defensively vulnerable in tight postseason games, making Stanton and Maybin the best options.

An injury to Edwin Encarnacion complicates planning. The power-hitting first baseman and designated hitter strained his left oblique during a doubleheader at Detroit last Thursday. While he is pain free, he likely will not swing a bat this week.

"We're optimistic but still a little bit of time yet," Boone said.

Catcher Gary Sanchez, who strained his left groin during a failed stolen base in that doubleheader, remains in the treatment phase of his recovery.

"Again, optimistic that by the end of the season he'll be good to go, but it probably will be close, too," Boone said.

Left-hander J.A. Happ had a cortisone shot Friday to treat biceps tendinitis in his pitching arm and anticipates making his scheduled start for Thursday's series finale against the Los Angeles Angels.

"It's helped a little bit, for sure," Happ said.

Ace starter Luis Severino made his season debut Tuesday night after recovering from a strained lat muscle sustained while warming up for his first spring training start. New York activated him from the 60-day injured list and designated infielder Breyvic Valera for assignment.

Reliever Dellin Betances (lat strain) and left-hander Jordan Montgomery (Tommy John surgery) made their season debuts Sunday, but the Yankees said Tuesday that Betances partially tore his left Achilles tendon hopping off the mound at the end of his outing.

Right-hander Domingo German (18-4) could follow CC Sabathia to the mound in Wednesday's game. German has thrown 140 innings, 55 more than his previous high, and has pitched just once since Sept. 6 -- a four-inning relief stint -- as the Yankees limit his use.
Report a correction or typo
Related topics:
sportsespnmlbgiancarlo stantonnew york yankees
Copyright © 2020 ESPN Internet Ventures. All rights reserved.
More Videos
From CNN Newsource affiliates
TOP STORIES