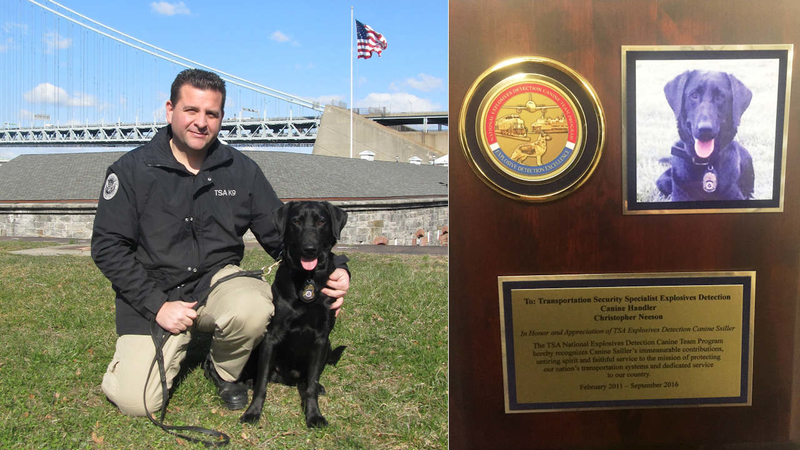 NEW YORK (WABC) -- A TSA canine named after a fallen 9/11 firefighter is finally getting the break he deserves. After six years of detecting explosives behind the scenes at JFK Airport, Ssiller is officially hanging up his collar and ready to be a dog.

The 7-year-old, 58-pound black lab turned in his badge this past weekend and now gets to spend his days at home, being "just being a dog" instead of working at the busy airport.

"Ssiller has been an ideal partner," TSA Inspector Christopher Neeson said. "It's going to be a big change for him in retirement, one that he deserves for so many years of service to the mission. I imagine he'll miss working in the airport."
Ssiller has worked exclusively with Neeson, who is adopting the dog to keep as a pet in his retirement.

"My wife is in love with him, my children are in love with him, there is now way I could not have him," Neeson said. "We call it a marriage. You get married to your dog. You're with them more than any other person in your life."

Neeson will be training for 12 weeks with a new canine partner at TSA's National Canine Training Center in San Antonio, Texas, to bring back to work at JFK Airport.

"Now when I leave the house with the other one, he'll be like, 'Why are you leaving me, daddy?'" he said. "It's like dropping your child off at daycare for the first time. I'm going to cry."

As a test, we planted a substance that could be found in a bomb. Within seconds, Ssiller sat, his way of saying something is there.

"He doesn't know that he just found an explosive," Neeson said. "All he knows is that he's going to get his toy."

It's a squeaky yellow ball, that Ssiller sees as an exhausting game of hide and seek.

"Every day, when they go home, you don't see them for hours," Neeson said. "They have to have their down time."

So what's next for Ssiller? Retirement looks very different when you're dealing with a dog of this caliber.

"I'm going to have to ween him down and give him a purpose," Neeson said.

There is the possibility he will become a therapy dog, but for now, it's just a job well done for this man's best friend.

Ssiller was named after Stephen Siller, a Brooklyn firefighter who skipped out of a family golf outing to head into Manhattan when he got the news of the terrorist attack on the World Trade Center.

Siller drove his personal vehicle to the entrance of the Brooklyn Battery Tunnel, but it had already been closed for security. Determined to carry out his duty, he strapped on his gear and raced on foot through the tunnel to the Twin Towers, where he gave up his life to save others.

TSA canines named after those who died on 9/11 carry two identical first letters to start their names, and Ssiller retired September 25, the same day of the annual Stephen Siller Tunnel to Towers 5K Run and Walk in New York City.

Ssiller and Neeson were on hand to start the race, which retraces the firefighter's footsteps from the Hugh L. Carey Tunnel (formerly the Brooklyn-Battery Tunnel) to the World Trade Center site on September 11, 2001.