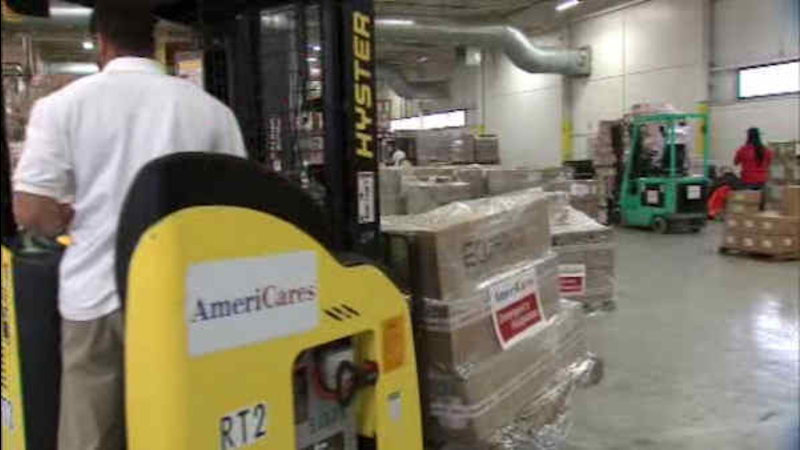 STAMFORD, Connecticut (WABC) -- Rescuers are in a race against time to find survivors from a powerful 7.8-magnitude earthquake as the death toll from Ecuador's strongest earthquake in decades has risen above 500.

The Ecuadorean Attorney General's Office says 499 of the dead have been identified so far and returned to loved ones.

It says 11 foreigners were among those killed.

On Tuesday, teams from all over the world fanned out across the country's Pacific coastline to look for the dozens of people still missing. Residents joined in with their bare hands, increasingly desperate as the clock for finding survivors runs down.

But back at home, many have expressed concern about getting humanitarian aid to the country. And a Connecticut-based group called AmeriCares is trying to make that happen.

Workers at the Stamford warehouse have been prepping pallets packed with provision that will soon be headed to Ecuador.

"Basic things in some cases, like bandages, pain medications, supplies that are used for crush injuries," AmeriCares Jed Selkowitz said. "Because obviously, an earthquake results in a lot of those types of injuries."

AmeriCares has dispatched two team members to the quake-ravaged nation who will report back what specifically is needed. Rescue crews are still trying to save people trapped in the rubble following the natural disaster that killed hundreds and injured thousands, with the number of casualties expected to rise as damage is assessed in rural areas.

"One of the challenges that the Ecuadorian government has been having is reaching those communities to find out truly what the total devastation was," Selkowitz said. "So when our team is on the ground, they're
able to better report back."

There was also a scare for parents in our area, as 30 students from Staples High School in Westport were already in Ecuador on a service mission with the group Builders Beyond Borders. Thankfully, all of the students were fine, as they were in areas far from the epicenter.

But Brian Bayer, an American teacher living in Ecuador, had a close call. His building was heavily damaged in the quake.

"The entire building was jumping up and down," he said. "Absolutely traumatized."

Back in Stamford, AmeriCares ships to countries in need year round, asking pharmaceutical and other companies for donations. The group will buy other supplies, if necessary, but Ecuador is in an emergency situation now. And that will mean long-term assistance.

"Our team will be down there for anything from a couple days to a few weeks initially," Selkowitz said. "But we are prepared to make a long-term commitment to this community in order to help them recover from this disaster."