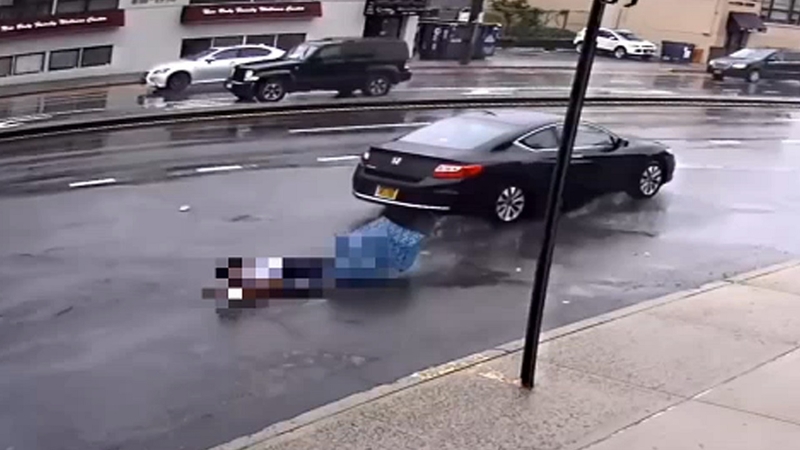 GRASMERE, Staten Island (WABC) -- A woman is under arrest in the hit-and-run that was caught on video in Staten Island.

GRAPHIC VIDEO: Police are now searching for the person behind the wheel of this car. They hit, left a 62 yo woman in Staten Island @ABC7NY pic.twitter.com/B9NyzNCjkq

The 62-year-old woman was dragged and left lying in the street near Woodlawn Avenue and Clove Road in the Grasmere section on the morning of July 14th. The victim was rushed to Staten Island University Hospital in serious but stable condition.

On Wednesday evening, police announced that they had arrested Beatrice Tchoungoua, 22, of Staten Island. She's facing charges of leaving the scene of an accident, aggravated unlicensed operator, failing to yield to a pedestrian, and failing to stop at a stop sign.

David Gonzalez says the victim was in extreme pain and was yelling that she could not feel her legs.

Gonzalez was among a handful of people who ran to help the woman, who was lying in the street.

Witnesses said that the suspect never slowed down or stopped to see if the woman was dead or alive. She was rushed to Staten Island University Hospital in serious but stable condition. She is expected to make a full recovery.

Gonzalez says the recent hit and run only adds to traffic troubles at the intersection of Woodlawn Ave and Clove Road. He says drivers race through stop signs, speed up to beat traffic lights or blatantly show no regard for pedestrians crossing the street in the crosswalk.