Steyer, Bloomberg's 2020 delegate gambit is an effort to change the political map 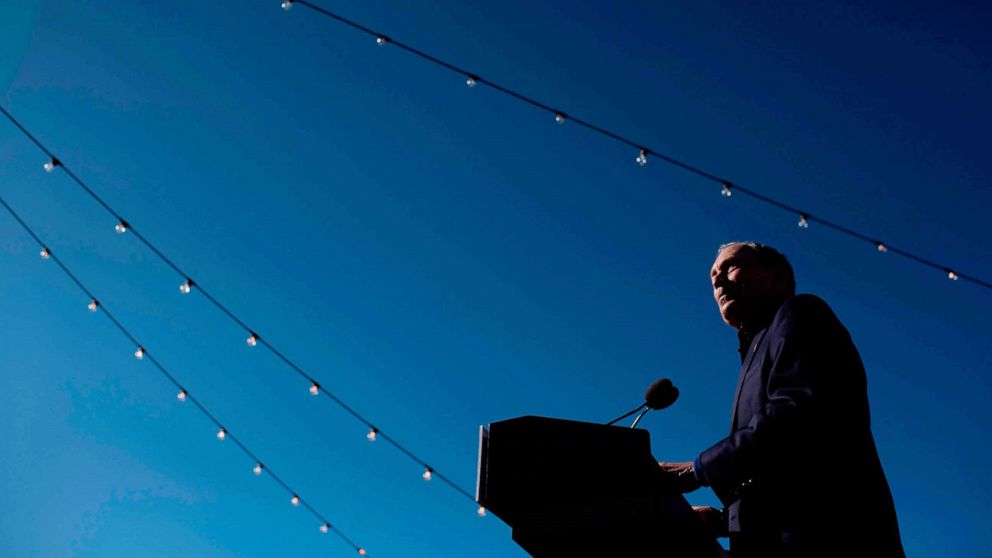 In the final push before the first debate of 2020, the last before voters have their first say, the two billionaire Democratic presidential contenders have zeroed in on strategies that leverage two precious assets for any campaign: time and vast amounts of money in states that could help net delegates.

Bloomberg has already pushed past the $200 million mark on ad spending and has pledged that even if he does not take the nomination, he and his vast assets will stay in the race to boost whoever does. He considers it an "investment" in beating President Donald Trump.

Steyer has spent more than $141 million -- media buys which have helped to propel his polling and donations to an eleventh-hour spot on Tuesday's debate stage.

Both are self-funding their campaigns; Bloomberg leaving open the possibility that he could eventually put as much as a billion dollars into the race - even if it's not his to run.

The two candidates may both be similar in their fortunes, but the way they're staking their bets on the 2020 board could not be more distinct.

Steyer has swamped competitors on the airwaves in early states, playing retail politics with boots on the ground as well. Moreover, his campaign has just hired Jeff Berman, a banner name among the pundit class who quite literally wrote the book on delegate strategy. Berman was an instrumental force in engineering Barack Obama's 2008, and a major role in Clinton's run eight years on. Earlier this cycle, he was also on for Texas Rep. Beto O'Rourke team.

Bloomberg, meanwhile, is throwing out the rule book altogether: bypassing the early states entirely, honing directly in on the delegate-rich Super Tuesday spots like California, Texas, and Florida.

Monday, on the eve of the first debate of this election year, he penned an op-ed calling to reorient the Democratic primary calendar to put battleground states first - before Iowa and New Hampshire.

"Our current system-in which two early states dominate the candidates' time and resources-is in urgent need of reform," Bloomberg writes. "Right now, we are in danger of repeating 2016 in large part because, as Democrats focus on Iowa and New Hampshire, Trump is operating at full-speed in the battleground states," Bloomberg writes. "Tuesday, while Democrats are on stage in Des Moines, Trump will be speaking to thousands of supporters in Wisconsin - a state Democrats need to rebuild the Blue Wall."

His is a novel gambit -- that's never been tried before, save for Giuliani's brief bid in 2008, which began in Florida - and ended there.

"It's uncharted territory," Sheila Krumholz, executive director of the Center for Responsive Politics told ABC News. "Here we are with not one, but two mega millionaire candidates that are set to spend ungodly sums to force the ability to make their campaigns viable.

"All this would not be possible were we not in a wide open field," Krumholz continued. "The field has winnowed, but we still do not have a clear nominee. There are the leaders, and there are these kind of pretenders to the throne - but nobody has been anointed."

Campaigns looking to ride the dark horse on to victory agree.

"Right now this race is wide open, and there's no clear leader," Berman told ABC News in an interview. "We have a front runner who is not running in front. So the race is very flat in terms of - no candidate, having consolidated more support than the others."

"Tom has a unique path - because he's competing in the early states, and looking to build that base and that momentum... then have substantial resources to compete in Super Tuesday and beyond."

Berman told ABC News he sees the four early states as a potent launching pad for the race ahead. Among those crucial Super Tuesday states - California - where Steyer is from: which could make for handy home state advantage.

"Who would have foreseen months ago that Kamala Harris would be out - Swalwell would be out - and that Tom would be the home state candidate from California?" Berman said. "This is the largest available basket in the country - and he's going to compete here for every delegate."

As Steyer's team looks towards the West from Iowa - Bloomberg's team is already there - building out his staff operation in the state that awards the most primary delegates.

"I know Jeff - he's smart," Kevin Sheekey, Bloomberg's campaign manager, told ABC News Wednesday. "Mike has started an incredible team. There are probably a handful of people maybe five nationally, who can really understand Democratic party rules - I would say maybe three of the five are currently working on the Bloomberg campaign today. But you're right, the issue of understanding delegates, how you get on the ballot, ultimately how you might contest a convention - where you didn't have a clear winner - is a really important goal. I don't think Jeff is going to help Steyer in the first four primary states."

Mitch Stewart, a senior field organizer for both of Obama's presidential campaigns, has now been tapped to run Bloomberg's delegate process. It is an effort built on the robust network of relationships that Bloomberg has nurtured for years -- even if that network doesn't stretch through Iowa.

"The Democratic party has made an enormous mistake in how we structure our party primaries. It's not the candidate's fault, it's the system's fault," Sheekey told reporters. "The system forces the Democratic candidates to spend a year collecting every dollar they can from every part of this country and investing it in a state in the upper midwest that Donald Trump will win. what the Democrats have done - the party has put the candidate sin this place where we have to put every nickel, every soldier, every door knock in a state that ultimately we will lose and that's an enormous disadvantage."

"In Bloomberg's case - he's skipping over the kind of slogging that the top tier of other candidates have been undergoing to prove their mettle," Krumholz tells ABC. "For Steyer - he's also been working the hustings."

"We've always said - and it remains true until proven otherwise - that money is essential," Krumholz added. "It is sine qua non - but it is not enough on its own. So the question remains - with this investment, if Bloomberg or Steyer are able to catapult themselves, and leapfrog over the field."

Berman casts doubt on whether any candidate flying over Iowa can stick a landing on the nomination and he and the Steyer campaign are looking to build on that domino effect buzz amongst the early states.

"No strategy has worked that has not included the early voting, because of the momentum that candidates gain from the early contests," Berman told ABC News.

Experts tell ABCNews, the issue for Steyer's candidacy may be going toe-to-toe with Bloomberg's extensive executive record - not just his bigger bankroll.

"He was the mayor right after 9/11 - in office for years - it's harder for Steyer, he has no record to point to. He's never held public office," Larry Sabato, political analyst and director of the University of Virginia Center for Politics told ABC News.

"But the conditions for Bloomberg have to be just right - you have to have multiple winners in the Democratic Party in the first four contests. You have to have a mess," Sabato said. "In other words - you can't have a hero riding over the hill on a white horse. There would have to be a crisis I think, for him to prevail," Sabato said - though adding - it's conceivable for Bloomberg's vast sums and rapidly expanding team to upset the table traditionally laid for the electoral landscape. "The very fact that one person can even the playing field -- that is very significant."