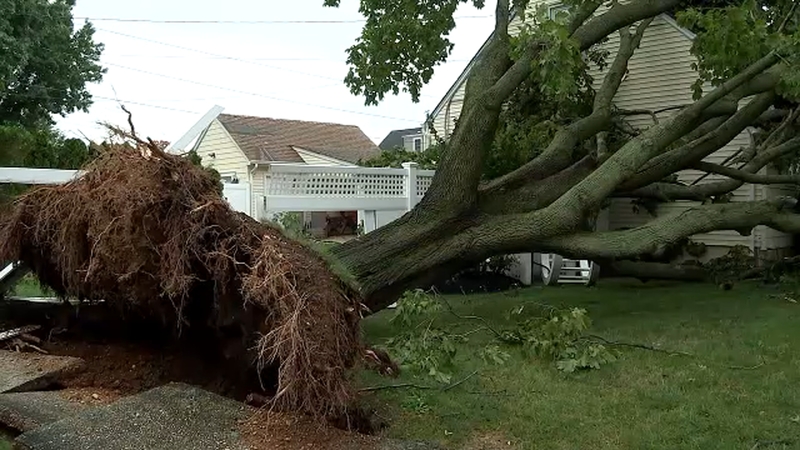 The damage included the collapse of an exterior wall on a Farmingdale warehouse, which fell onto parked vehicles around 9:35 p.m.

The wall of the Maxus Worldwide Nutrition, on Executive Boulevard, collapsed onto the vehicles, leaving a gaping hole in the side of the building.

A police K-9 unit and firefighters with thermal imaging cameras searched for victims in the vehicles and rubble, but no one was injured.

Elsewhere, trees littered streets and took down power lines in numerous towns in both Suffolk and Nassau counties.

Also in Farmingdale, a neighbor's giant tree fell on 83-year-old Nancy Askedall's home on West Walnut Street. It first plowed through a trampoline and then smacked into the rear side of her home.

Another resident's Ring camera from around the corner captured a transformer blowing.

"And then all of a sudden, the power went out," resident Kaitlyn Doran said.

At the height of the outages, there were some 67,000 customers without power.

Crews worked all night and Friday morning and afternoon to restore power.

In Brightwaters, two trees fell on a home, with no injuries reported.