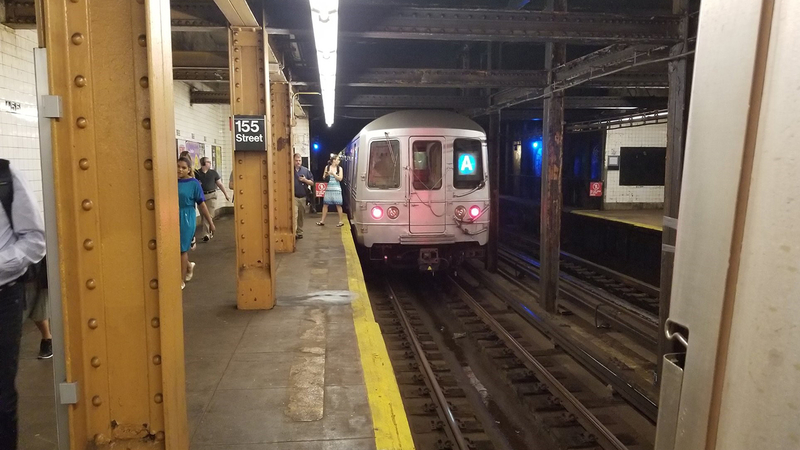 HARLEM, Manhattan (WABC) -- Commuters across multiple subway lines had to deal with a nightmarish morning commute Monday after a track fire south of the 145th Street Station in Harlem snarled service.

The FDNY said rubbish on the tracks caught fire at 7:30 a.m., and the fire spread inside the tunnel.

B and C trains were completely suspended, while A and D trains were suspended north of 125th Street in both directions. Service was restored with extensive delays two hours later.

The MTA said all passengers that were stuck between stations were able to get off their trains. EMS evaluated people who complained of being overcome by smoke at the 135th Street station, and nine patients were taken to local hospitals.

People who were unable to get on A, B, C or D trains flooded the 1 trains at several stops, including 145th and 168th streets.

There were also long lines for the M3 and M4 buses.

Commuters are escorted out of the front door of a southbound A train between 155th St. and 163rd St:

My morning commute... thanks @MTA pic.twitter.com/HRP4sj9CWu

It took firefighters a while to find the fire, in part because they needed to wait for trains that were stuck to be moved before power could be shut off and the fire extinguished.

The MTA released a statement on the incident that read, in part:

"MTA NYCT and emergency crews including the FDNY responded immediately and worked to restore service as quickly as possible. As an alternative, customers were sent redirected to the 1 line, which experienced heavy volume. We are reviewing the entire incident, we apologize for the inconvenience, and we appreciate our customers' patience."