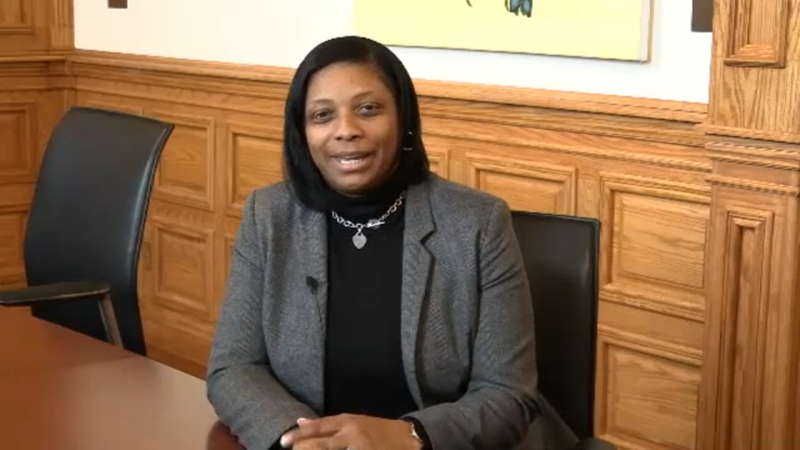 JERSEY CITY, New Jersey (WABC) -- For the first time, a Black woman will take over the Jersey City Police Department -- but that's not the only thing that makes her unique for the position. She is also the first civilian to take the job.

"Sometimes thing seem big, something is big but it's not bigger than what I can handle. I'm looking forward to the challenge," said Tawana Moody.

She's never carried a badge or a gun, but now Moody will lead the nearly 1,000 sworn officers in the Jersey City Police Department.

Moody came into the department as a clerk, which is a civilian position. She said it never crossed her mind that she would become a chief.

"She's going to, in addition to her director duties, assume all those day-to-day duties of the police chief," Jersey City Public Safety Director James Shea said.

She has been with the department for 16 years and was named police director three years ago. In that role she handled policy, budgeting and unit size.

Now she will also handle the day-to-day operations, including discipline, internal affairs, transfers and training.

"The mayor and I began to notice about seven years ago that she was the person, as a civilian, that a lot of the officers went to when they had problems," Shea said.

There has been some criticism from the law enforcement community.

"I do expect the uniformed officers to push back because there's a culture where they protect each other," Jersey City Mayor Steve Fulop said. "Regarding Director Moody specifically she has a proven track record and I'm comfortable with that."

Assuming the responsibilities as chief puts Moody in the position to review excessive force complaints - disciplinary matters that in New Jersey, only a police chief can oversee.

"We realized that there's culture in police departments in New Jersey that ultimately run counter to transparency and accountability without having civilian oversight," Fulop said.