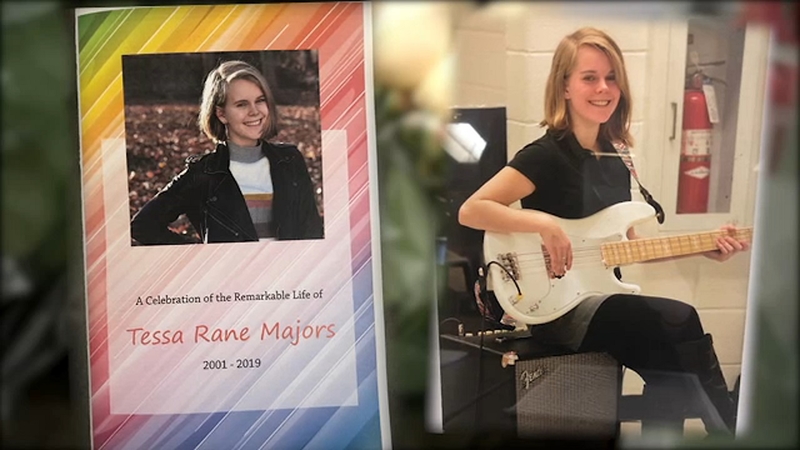 CHARLOTTESVILLE, Virginia -- A Barnard College freshman who was fatally stabbed in a New York City park earlier this month was remembered by friends and classmates Saturday at a private memorial service at her high school alma mater in Virginia.

Those who knew Tessa Majors gathered at St. Anne's-Belfield School in Charlottesville, Virginia, local media outlets reported. Music figured prominently in the gathering, along with poetry readings and personal testimonies by those close to her.

Majors had played in a rock band in New York and had told an editor from a newspaper internship in high school that she planned to take journalism classes in college. She was attacked Dec. 11 in a park near the school's campus in New York City.

More than 25 young musicians and Majors' friends performed many of her favorite songs on a stage, leading off with Paul Simon's "Graceland" and closing with "Prom Queen," a song she wrote for her band, The Daily Progress newspaper reported.

"Essentially, Tess had a really big band and I was a part of it. You all are too," friend Nahlij Corbin told those present, according to the paper.

The ceremony also included poetry readings and other remarks by friends and classmates. It was not open to the general public or the media.

St. Anne's Head of School David Lourie said that the diverse crowd spoke to the influence Majors had on people.

"Each and every one of us can share stories about Tess and how our time with her at school, in camp, in the music studio, on the stage, over a cup of coffee, left us feeling better, left us feeling more optimistic about the future," he said, according to The Daily Progress.

The paper reported that a video of Majors recorded during her time at St. Anne's was played. In it, she described how she found an outlet to express and understand her own feelings in songwriting and encouraged others to share their feelings and embrace their vulnerability.

"The world will benefit from hearing your unique perspective much more than it will from your silence," she said in the video shot last May.

Majors' death, in a park in proximity to the Barnard campus, has troubled many in New York City because of its apparent randomness.

Police have said as many as three youths confronted the 18-year-old. So far, only one 13-year-old has been arrested. He is charged as a juvenile with felony murder and other counts. Police said the youth acknowledged that he was with the group that confronted Majors, but said he did not stab her.