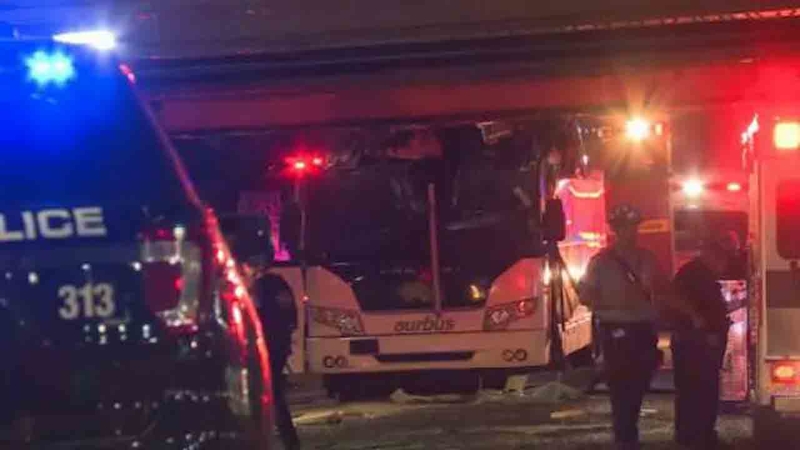 NEWARK, N.J. (WABC) -- Several people are being treated for injuries after a tour bus returning from Washington, D.C. crashed into an overpass in Newark, New Jersey.

It happened at 11:45 p.m. Sunday at Edison Place, next to Newark Penn Station.

The bus, operated by Liberty Coach and branded "Our Bus," hit the overpass with enough speed to sheer off part of the roof, leaving the inside of the front of the bus exposed.

Overnight a bus from DC to Newark slammed into an overpass at Newark Penn Station. 50 people on board and everyone is expected to survive, police said. Live updates on EWN #abc7ny pic.twitter.com/44CWy7OTm1

Newark Police say the vehicle, which was heading from Washington, D.C. to Newark Penn Station, was carrying about 50 people.

Some were taken to area hospitals to be treated for injuries described as non-life-threatening.

"The glass is, like, crashed and everything falling down and people, like, yelling and (a) kid (is) crying," said Ronnie Tren.

"I was sleeping, and I felt, like, a sudden jerk, and I was in shock," said VJ Rupani. "The people who sat in the back of the bus... in the back... are, like, okay."
But, Rupani added, other passengers were bleeding.

The bus that crashed in Newark is operated by PA-based Liberty Coach and branded as @RideOurBus — federal safety data shows they previously had zero reported crashes in the last 2 years #abc7ny pic.twitter.com/cSYZi5JMID

There are clearly posted yellow signs warning drivers of the low clearance: 9 feet, 4 inches. The typical tour bus is way over that.

I contacted Pennsylvania-based Liberty Coach. Monday morning, and a man on the phone said simply, "No comment."

I also checked federal safety data, which shows Liberty Coach has not had any reported accidents in the last two years.

There has been no word what may have led the driver to hit the overpass.