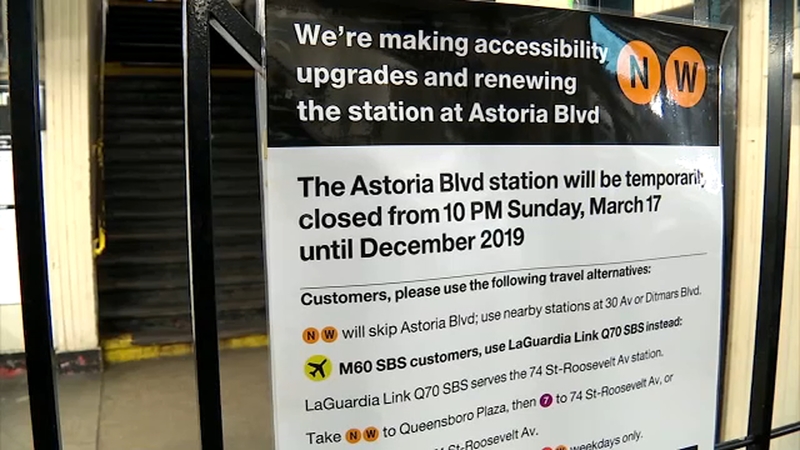 ASTORIA, Queens (WABC) -- Subway riders who take the N and W trains from Queens to Manhattan are now facing a tougher commute.

One of the busiest stops with a popular connection to LaGuardia Airport, the Astoria Boulevard station, is now closed for the next nine months.

The station is shut down until the end of the year for major upgrades.

"Unfortunately, we have to deal with the MTA's renovation process," commuter Gus Munez said. "In the end, it'll be good. But it's a pain in the butt to deal with in the meantime."

The MTA says the work is part of a multi-phase project to restore the well-traveled Astoria line. Despite complaints from some riders who say they weren't adequately notified, the agency insists it warned commuters early on of the changes.

The work also includes raising the mezzanine that regularly gets clipped by trucks.

Some shop owners are very concerned about the impact on their business, including Lieqat Khan, who runs a convenience store just steps from the station.

"We're going to lose a lot of money, and a lot of our customers will leave," he said. "Plus property tax, plus bills. Who's going to pay that?"

However, many realize that to keep the stations current and safe, they have to deal with the inconvenience.

"I've seen the outcomes of Broadway and 36th Avenue, so that has been an amazing turnaround," Munez said. "And it's really good service that is in order now, but the process itself is a long haul."

Astoria Boulevards is also a popular location for people to catch the M60 bus to LaGuardia. The bus is still there, but customers are advised to get off the subway at the stop before (30th Avenue) or after (Ditmars Boulevard) and walk over to take the bus.

CLICK HERE for more information about the project from the MTA.