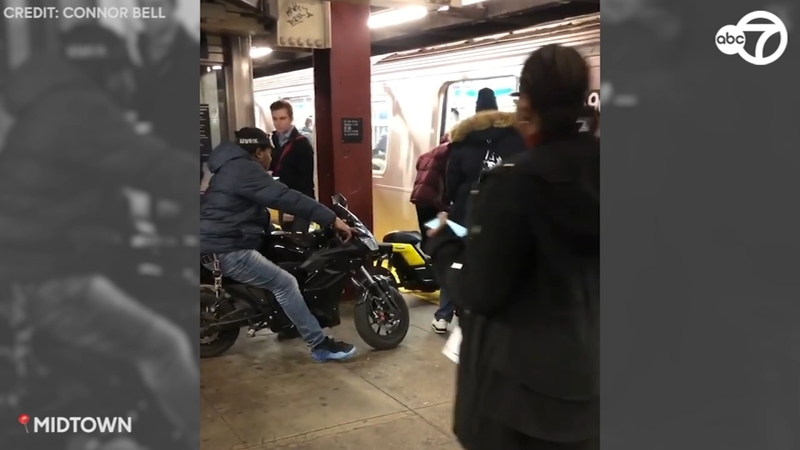 NEW YORK CITY (WABC) -- The NYPD says it is investigating a video circulating on social media that shows three men taking motorbikes onto a subway car.

According to Connor Bell, who took the video, the incident took place December 11, just after 6 p.m., at the Rockefeller Center Station boarding the uptown F train.

The men either roll or push the bikes onto the train, almost hitting one person in the process and turning more than a few heads.

"I always take the train, and it's already too much going on," said Aicha Dansoko, of Tremont. "So we don't need dirt bikes ruining things for us."

Chris Coronesi thinks they got the bikes onto the subway using the exit gates.

"People leave the gates open," he said. "Open the gate, anyone can come in."

The MTA allows bicycles on the New York City subway, but not self-propelled or motor-propelled vehicles.

"This is not only alarming for other passengers but it's completely unsafe," MTA officials said in a statement. "Motorized vehicles pose a hazard to our customers and are banned in the subway system."

There is a good reason why motorized bikes are banned from the subway. They are powered by either gasoline or electricity, which could be a recipe for disaster if something were to go wrong.

"Somebody's going to get hurt," Coronesi said. "They shouldn't be allowed on the subway. It's dangerous."