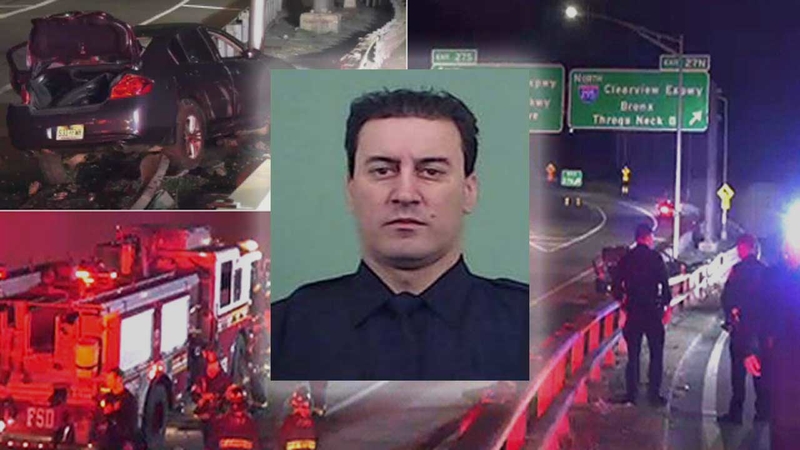 FRESH MEADOWS, Queens (WABC) -- An NYPD officer, a 43-year-old husband and father of two, was killed early Tuesday when he was struck by a passing vehicle while diverting traffic from a previous fatal crash on the Long Island Expressway in Queens, and an alleged drunk driver is in custody.

The officer is identified as Anastasios Tsakos, a 14-year veteran of the force assigned to Highway 3, who has a 6-year-old daughter and a 3-year-old son.

"We stand here this morning reminded once again, in law enforcement, there is no such thing as a routine job," NYPD Commissioner Dermot Shea said. "We stand here devastated and trying to pick up the pieces of what is a shattered home and a shattered NYPD family." 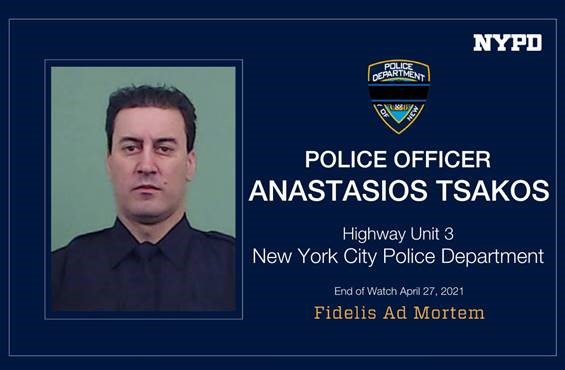 Mayor Bill de Blasio held a moment of silence for the officer during his daily press conference.

"This happened because two different people were driving recklessly, under the influence it appears," he said.

Police said the driver, 32-year-old Jessica Beauvais, of Hempstead, was intoxicated and had a suspended license when she swerved to avoid other cars and hit Tsakos as he stood next to his marked vehicle.

Details from Beauvais' arraignment revealed that Tsakos was struck by a 2013 Volkswagen in the eastbound lanes of the LIE near Francis Lewis Boulevard just before 2 a.m.

According to prosecutors, the officer was waving traffic off the LIE in full reflective gear, next to his marked vehicle with flashing lights and a series of cones.

They say Beauvais drove into Tsakos at full speed, caving in her windshield and sending the officer flying 100 feet.

Other cops had to dive out of the way as she drove through the scene of the original crash they were working on the LIE.

Prosecutors say when cops finally got her stopped, she had jumped a curb and then put her car in reverse and rammed a police car twice.

After they had her in custody, she is captured on body-worn camera saying "What did I do?"

"I did hear a thump so I knew I hit something," she later told detectives. "But I didn't see what it was."

She allegedly made statements admitting to drinking vodka, tequila and wine and smoking pot in the hours before the incident.

Prosecutors say Beauvais, who hosts a podcast critical of police, had recorded an episode, posted it to Facebook and then hit the road.

"I'm sorry," she said in tears as she was walked from the precinct. "I'm sorry that I hit him and that he's dead."

NewsCopter 7 was overhead as the body of Officer Anastasios Tsakos was transported from the hospital to the Medical Examiner's Office.

"It's a very, very painful moment," de Blasio said. "Police Officer Anastasios Tsakos gave 14 years to this city protecting people, and that's what he was doing this evening. He was out there trying make sure that everyone was safe. And he is dead because someone drove under the influence and recklessly. Someone drove with a suspended license. He's dead because he was at an accident where people had driven recklessly also with a suspended license."

In the earlier crash, near the ramp to the Clearview Expressway around 12:30 a.m., Shea said officers arrived to find the vehicle on fire. They broke the window and pulled people out, but a rear passenger did not survive.

"We see here a horrendous pattern, people doing the wrong thing and other people dead because of it, and one of them a hero officer who did everything right in his life for us, and he is dead because of other people's negligence," de Blasio said. "The commissioner and I just spent time with his widow, Irene, and the pain she is going through, there are no words for. But all New Yorkers need to realize, a few hours ago, she was looking forward to seeing her husband again, and now she won't."

Beauvais reportedly told police she was drinking beer and vodka in Brooklyn. Authorities say she was slurring her words and blew a .15 BAC on a Breathalyzer.

"(Tsakos) leaves behind a 6-year-old daughter, a 3-year-old son," de Blasio said. "They will never see their father again because somebody did the wrong thing, and we have to understand, every day our officers go out looking to do the right thing. But here's a good man who won't be home. Just so much pain. So please everyone, realize, this family will never be whole again. What we will do is everything we can to support these children, to support this widow. But it won't be enough."

Tsakos was rushed in critical condition to New York-Presbyterian Queens Hospital, where he later died of his injuries.

PBA President Pat Lynch highlighted the dangers officers put themselves in every day.

"Last night, when most of us were sleeping, there was New York City police officers out putting themselves at risk," he said. "Sometimes we look at police officers, we focus on their uniform and we focus on the stern face that we have to put on to do our job professionally. But a day like today, I think we have to take a moment to think about it, that under that uniform, behind that stern face, was a father, was a husband, was someone that was trying to put their life together for the future of their family. In the police department, there's two compliments you can give a fellow police officer that top no other. He's a cop's cop, and he's a good guy. And you heard them both in this emergency room. Yes, he was a good guy."

The officer was struck on the eastbound lanes near Francis Lewis Boulevard just before 2 a.m. this morning.

Shea said he didn't recall having met Tsakos, but that his colleagues spoke highly of him.

"I've spoken extensively tonight with members of his unit that knew him for years, describe him as the best of the best, describe him as a person that would never ask 'Why,' just 'What do you need done?'" he said. "And I will tell you that it is devastating to speak to his widow. Two young children that are going to grow up without a father. Well now, they're going to have 35 other fathers, but it is never going to replace what has been lost tonight."

He also called for an end to divisiveness.

"These members on the hill behind you are fathers, mothers, daughters, sons, and they come to work every single day willing to protect you," he said. "And sometimes that happens, and sometimes it's at a great cost. We have to stop the rhetoric that is taking place not only in this city, in this country. It is toxic, and it has to stop. And we need leaders to stand up and call for it to stop across this entire country, now."