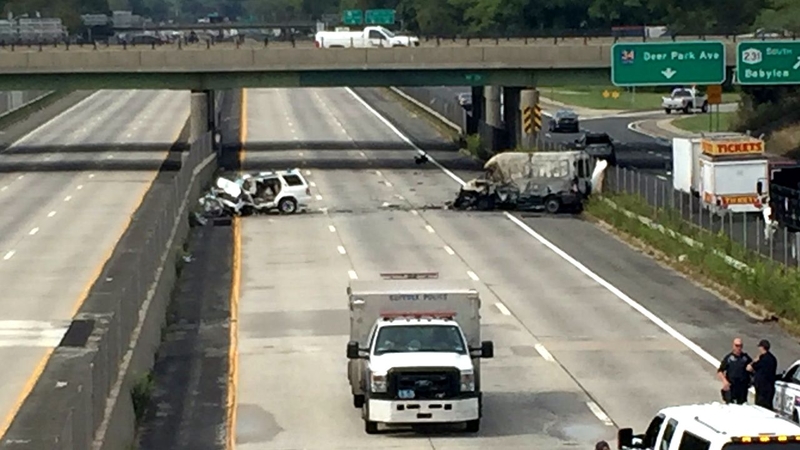 WEST ISLIP, Long Island (WABC) -- Traffic is moving again on Sunrise Highway in West Islip, but early Tuesday morning it was the scene of a horrific, fatal car accident.

At 4:38 a.m., Eyewitness News is told a 2000 Nissan Pathfinder crashed into a 2016 Ford van causing the van to burst into flames. The driver inside the van was pronounced dead at the scene.

It happened on the westbound lanes of Sunrise Highway between exits 39 and 40.

Authorities report the driver of the Nissan was heading the wrong way, going eastbound in the westbound lanes.

Worse yet, the driver was an off-duty Suffolk County police officer.

24-year-old Robert Scheuerer has been with the Suffolk County Police Department only a year.

He worked out of the third precinct which is not far from the accident site.

Given the protective concrete divider and chain-link fence, it's actually quite difficult to head the wrong way on this portion of Sunrise Highway.

The nightmare accident snarled traffic during the morning rush.

The young officer was rushed to the hospital. Scheuerer has now been suspended without pay. He is also being charged with first degree reckless endangerment, a felony. More charges could follow as the investigation continues.