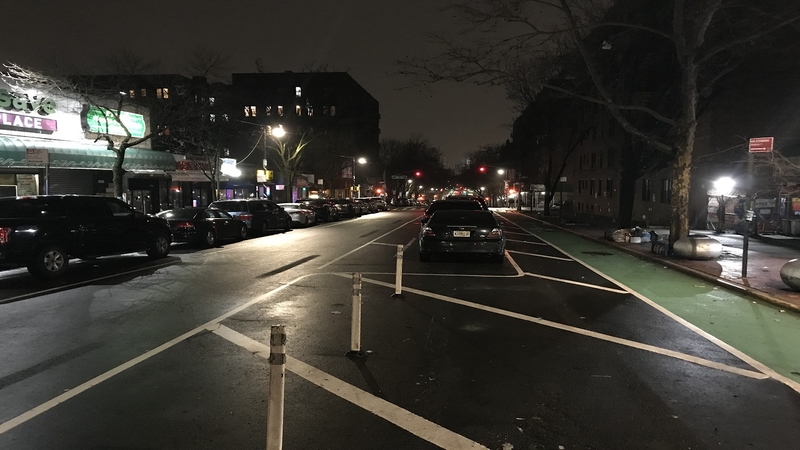 WOODSIDE, Queens (WABC) -- A small section of Skillman Avenue in Queens has undergone a dramatic redesign, but in the last six months after Department of Transportation changed the traffic pattern and parking, residents and business owners say it's just not working.

All it takes is one double parked car along the roadway, and FDNY's Rescue 4 can't move around it.

"We have to look at this and see what is the problem before someone gets injured or killed," said Manny Gomez, co-chairman of the group Queens Streets for All.

He says it is only one of numerous problems since the DOT reconfigured parking, pedestrian islands and a protected bike lane from 54th Street to 49th Street last September.

"One car lane is not going to be able to make it," Gomez said.

And with the fire house just around the corner on 51st Street, many said it was an accident waiting to happen -- until one actually did happen.

Last week, as the trucks were answering a call, the engine company made it through the one lane passage. But seconds later, the larger and longer Ladder 163 struck the back of a parked SUV.

"A car was sticking out a little too far, so that throws them out when they make the turn and caused an accident," Queens Streets for All Executive Director Patricia Dorfman said.

The five-block stretch drew DOT attention after a bike fatality and numerous accidents, and a DOT spokesperson said in a statement, "The treatment prioritizes safety for all users and provides protection for cyclists and created much needed pedestrian safety and traffic calming."

Some business owners say the changes have an a direct impact on sales.

He says customers find less parking, and businesses have trouble getting deliveries.

"We are making the lives of the delivery drivers more difficult and the people who own the stores where we buy the food," business owner Roque Rodriguez said. "Then in turn, all the traffic that is causing all the agitation as a result of this street not being wide enough."

They also worry about more accidents.

"The DOT should look into any crashes to determine cause and any steps necessary to prevent more," City Council Member Jimmy Van Bramer said.

"So they are looking at that, yes, and that is gratifying," Dorfman said.

What changes can or will be made remains to be seen.