WABC
By Jim Dolan
NEW YORK (WABC) -- You see the signs all over the city. No standing or no parking and at the bottom, the authority of the Department of Transportation written in bright orange.

But the DOT doesn't put up these signs. They sell them to construction companies.

"Has it changed the way you look at no parking signs?" Eyewitness News Reporter Jim Dolan asked.

"Yes, it makes me look at every sign and think about who put it up and is it really permitted?" a resident said.

The signs are actually bought and installed by construction companies, and, of course, police do write parking tickets for people who park in those spaces.

But those construction companies don't always follow the rules.

As Eyewitness News reported last month, on Henry Street in Cobble Hill, more than 80 people were given tickets in spaces that should never have been blocked off for construction: each ticket costing $115.

"They should somehow sanction the developer or whoever it was that put up that sign," said Dorothy Siegel, a resident.

And it's not just Cobble Hill.

Eyewitness News found one in Midtown Manhattan, nailed up to a wooden post, with ripped and replaced gaffers tape.

There was another on Broadway at 136th Street, it doesn't look official with all of the gaffer's tape over it, but people still get tickets all along Broadway. There isn't even construction there! The nearest construction is almost a full block north, all the way across Broadway.

A construction company was fined for the signs that were erected illegally in Cobble Hill. 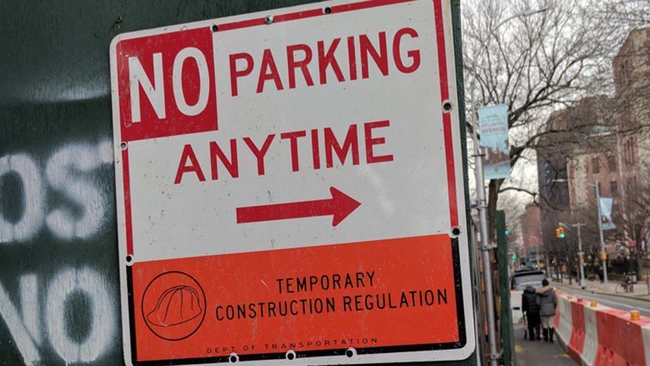