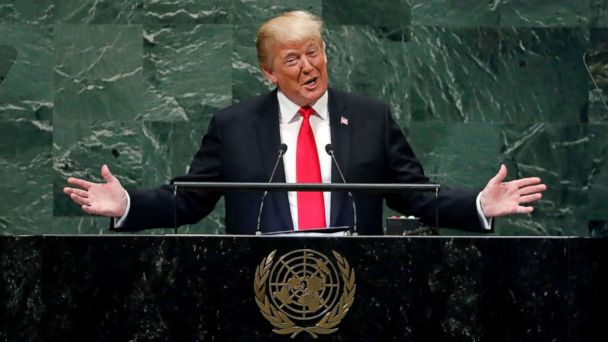 - President Donald Trump appeared to go off-script after boasting about his administration's accomplishments.

- He went on to defend his June meeting with North Korean leader Kim Jong Un and some of the controversial moves he's made at the United Nations.

President Donald Trump, speaking at the United Nations General Assembly Tuesday, was greeted with laughter after touting his administration's accomplishments in a much-anticipated address.

"In less than two years, my administration has accomplished almost more than any other administration in the history of our country," Trump said at the top of his speech, which prompted audible laughter in the hall.

"Didn't expect that reaction but that's OK," he responded.

He said the United States is a "stronger, safer and richer country than when I took office."

"We are standing up for America and the American people and we are also standing up for the world. This is great news for our citizens and for peace-loving people everywhere," he continued.

While he rattled off his administration's achievements and defended decisions that some in the international community have rebuked, the theme of his speech was that every nation had a "sovereign" right to make decisions for themselves.

"We reject the ideology of globalism and we embrace the doctrine of patriotism," he said at one point, calling on other countries to fend for themselves, too.

He praised his administration's progress with North Korea, thanking Kim Jong Un "for his courage and for the steps he has taken, though much work remains to be done."

In Tuesday's speech, Trump turned that ire to Iran, speaking about the "heartbreaking" tragedy in Syria and saying that any solution to the humanitarian strife in the region "must also address the brutal regime" in Iran.

He called on all nations to "isolate Iran's regime as long as its aggression continues" even as leaders from allies like Japan and France will sit with Iranian President Hassan Rouhani this week at the United Nations.

"Iran's leaders sow chaos, death and destruction. They do not respect their neighbors or borders or the sovereign rights of nations," Trump said. "Instead, Iran's leaders plunder the nation's resources to enrich themselves and to spread mayhem across the Middle East and far beyond."

Trump pushed back against criticism of some of his other controversial foreign policy decisions, including moving the American embassy in Israel to Jerusalem, levying tariffs on China, withdrawing from the U.N. Human Rights Council and threatening the International Criminal Court.

He said the prospects for peace have been "advanced, not harmed" by the embassy move, adding, "America's policy of principled realism means we will not be held hostage."

On the topic of tariffs, Trump said "China's market distortions and the way they deal cannot be tolerated," noting the tariffs on more than $200 billion in Chinese goods are an act of protectionism.

"America will never apologize for protecting its citizens," he said.

Trump had harsh words for Middle Eastern oil producers, who he claimed are taking advantage of the world markets while receiving military help.

"OPEC nations are, as usual, ripping off the rest of the world. And I don't like it. Nobody should like it," he said. "We defend many of these nations for nothing and then they take advantage of us by giving us high oil prices -- not good. We want them to stop raising prices. We want them to start lowering prices and they must contribute substantially to military protection from now on. We are not going to put up with it -- these horrible prices -- much longer."

While asserting U.S. energy independence, Trump also made a jab at Germany for its Nordstream 2 pipeline with Russia, saying it would make Germany "totally dependent" on the Kremlin. The line drew laughter from German Foreign Minister Heiko Maas in the audience.

One of the most controversial decisions announced by U.N. Ambassador Nikki Haley this year was the country's withdrawal from the body's human rights council.

Trump, defending Haley, said the U.S. "warned that the U.N. Human Rights Council had become a grave embarrassment to this institution, shielding egregious human rights abusers while bashing America and its many friends. Our Ambassador Nikki Haley laid out a clear agenda for reform despite reported and repeated warnings. No actions at all were taken so the United States took the only responsible course."

"We will not return until real reform is enacted," he added.

As for the International Criminal Court, Trump said the body "claims near universal jurisdiction over the citizens of every country."

"America is governed by Americans," he said, rejecting what he sees as an infringement on American sovereignty.

Additionally, he said that his administration is "taking a hard look at U.S. foreign assistance."

"Moving forward we are only going to give foreign aid to those who respect us, and frankly, who are our friends," he said.

Weighing in before the speech

Before Trump took the stage this morning, White House press secretary Sarah Sanders said he was going to use a "different tone" in his address.

"I think that his speech this morning is going to be a great moment for the president. We've had a tremendous amount of success -- particularly when it comes to the foreign policy front -- over the last year, since he gave his last speech," Sanders said Tuesday on "GMA."

She added, "If you'll remember the rhetoric last year was extremely tough with North Korea. I think you'll see certainly a different tone and a lot of progress has been made on that front, in large part due to the president's leadership."

Trump briefly spoke to journalists as he entered the United Nations, touching on topics like Iran and North Korea.

"I'm not meeting with [Iranian leaders] until they change their tune ... we look forward to having a great relationship with Iran but it won't happen now," he said.

On Monday, the president attended an event where the topic centered on curbing the use of illegal drugs and cutting off supply chains. The event was followed by an evening reception.
Report a correction or typo
Related topics:
abc newsnational
Copyright © 2021 ABC News Internet Ventures.
More Videos
From CNN Newsource affiliates
TOP STORIES