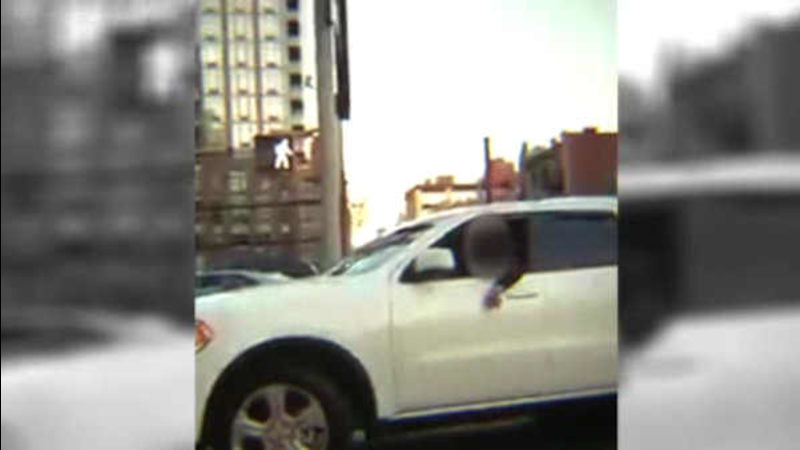 LONG ISLAND CITY, Queens (WABC) -- A driver in Queens was the target of what appears to be another bias incident in New York City.

Several local leaders say the incidents have spiked after the presidential election.

The latest incident, at an intersection in Long Island City, shocked an Arab-American citizen, who says he's never encountered this much hatred.

The video is laced with profanities and filled with so many ethnic slurs, most of it Eyewitness News cannot air.

The tirade, unleashed by a driver whose face we have blurred because he has not been charged, was encountered by an Uber driver named Mohammed.

"I am very shocked by what he say, and I feel very bad about what he said at that time," said Mohammed.

Mohammed, who asked that we not show his face and only use his first name, encountered the driver in the white SUV at the corner of 41st Avenue and 24th Street last Thursday morning.

Mohammed went around the man. A block away at the corner of 41st Avenue and Crescent Street, the other driver began his tirade.

"Were you fearful for your life, did you think something bad might happen?", we asked.

"Of course," he said. "He say a lot of things, especially for my family. He was very aggravated."

The other driver then said "Trump is president, you can kiss your (expletive) visa goodbye".

Mohammed says he and his wife emigrated from Morocco eight years ago and they both became U.S. citizens in 2014.

"Have you ever experienced anything like this?", we asked.

"Never happen to me," he said. "I never felt like what I felt like in that time with this man."

One of Mohammed's passengers encouraged him to put the video on social media.

"This is a teachable moment and I hope it serves as a wakeup call that an injustice anywhere is a threat to justice everywhere," said Gianaris.