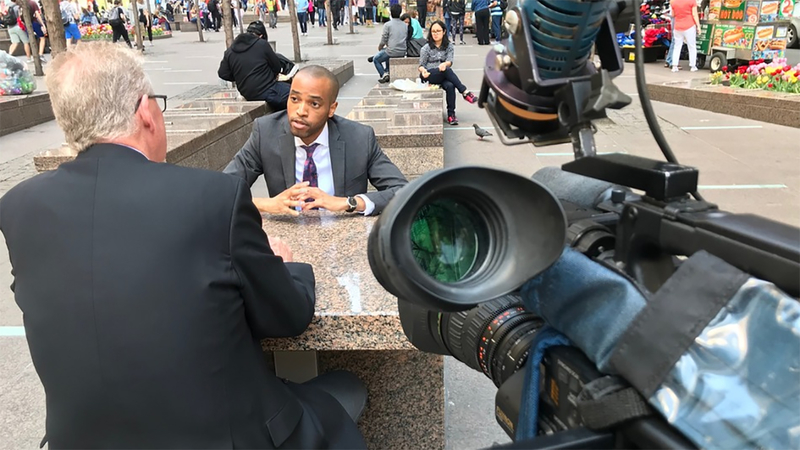 UPPER WEST SIDE, Manhattan (WABC) -- Darren Martin was moving into his new apartment on West 106th Street last Friday night when he was apparently mistaken for a burglar. "Somebody called the cops on me in my own building," he is heard saying on an Instagram Live video clip. He asks, "How many of you all? About six of you showed up."

Tuesday, talking with this reporter about the incident, Darren said, "I'd been in this situation with the police before and I wasn't surprised. I thought it would be easy. And then I remembered that I'm a black man moving into a neighborhood that is, you know, I would say is majority white."

He and a friend were moving things into the lobby and then up to a fifth floor walkup. The officers pulled up quickly to the apartment building, Darren opening the door for them as he stood in the lobby. "They began to question me. Why am I here? Do I live here? Give me your ID," he said.

Darren decided to capture the event on Instangram Live, including hearing the chilling police radio call that stemmed from someone calling with their suspicion that Darren was stealing something. "Someone trying to break into the door", said a police radio dispatcher. "I'm trying to break into my own apartment?" Darren asks. "Possible with a weapon, large too. Banging on the doors," says the dispatcher. "Oh my God," says Darren.

"To take it a step further and to say I had a weapon on me and that I was banging on doors, possibly trying to leave through the rooftop. It was all outrageous," he said.

Eventually everything checked out but not without concern. "I was lucky in this situation," he says.

Darren, who has worked for the Obama Administration and the House of Representatives, is now working for the City of New York. What disturbs him the most is the profiling. "How people are looking at you and how they are perceiving you is, I think, what could have really, sometimes deadly consequences," he says.

As he now settles into his apartment he is leasing for a year, Darren comes away with another life lesson and a valuable suggestion. "What I would ask folks to do is get to know folks. Get to know your neighbors. Be neighborly. I wish my neighbor had done that in this situation."