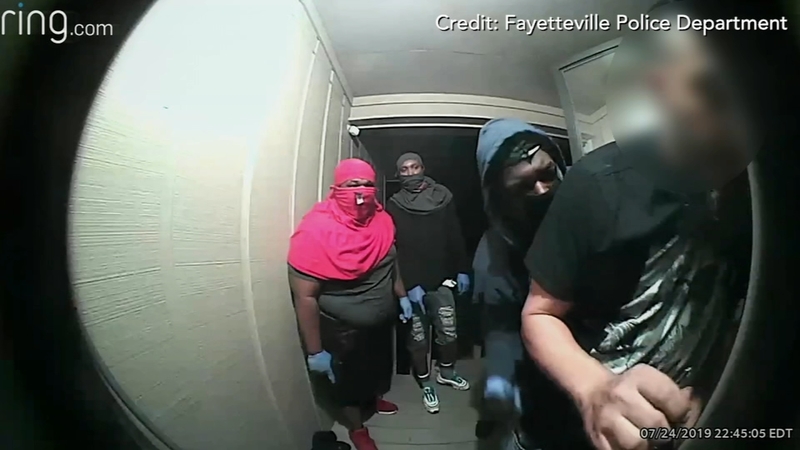 FAYETTEVILLE, North Carolina -- Dramatic video from a doorbell camera shows four masked men robbing a North Carolina man at gunpoint outside his home and forcing him to unlock the front door.

Fayetteville Police Department said the case is being investigated as a robbery with a dangerous weapon.

The man said he was attacked outside his home around 10:45 p.m. Wednesday after buying lottery tickets.

He can be seen on his own Ring doorbell video camera bleeding from the head after being pistol-whipped, while one of the men held a gun to his back and forced him to unlock his front door.

"Open this door or we're going to kill you," one of the suspects shouts at the man.

The victim's fiancée said she was inside the home with her four-month-old and four-year-old children.

She told police she opened the door when she heard the commotion outside.

Officers said the robbers took cash, phones, debit cards, lottery tickets, and marijuana and smashed the Ring doorbell as they left the scene.

"It is definitely concerning especially if you're living in that neighborhood or if you are the victim yourself," said Fayetteville police spokesperson Shawn Strepay. "As of right now, we're obviously very early on in this investigation, but our detectives do have some information saying that this may not be a completely random incident."

The video was uploaded using the Neighbors app, which Fayetteville police partnered with earlier this year.

Anyone with information about the robbery is asked to call Fayetteville Police Department or Crimestoppers at (910) 483-8477.