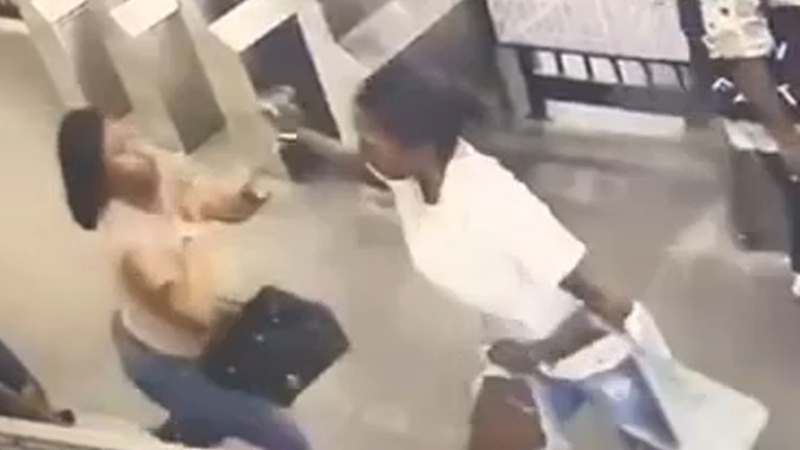 BROWNSVILLE, Brooklyn (WABC) -- New video shows the fight that led up to a deadly stabbing at a subway station in Brooklyn.

It shows 30-year-old LaTanya Watson and 20-year-old Mia Simmons walking through the turnstile at the Rutland Road-Sutter Avenue station around 9 p.m. Tuesday before they begin fighting.

Police Watson pepper-sprayed Simmons, who then pulled out a knife and stabbed Watson in the neck, arm, and face.

We have stopped the video before the stabbing takes place.

"She went to school, graduated, had a job, went to work," dad Frank Watson said. "This is an unfortunate situation, and I haven't made sense of it yet."

Watson died at the hospital, and Simmons is charged with manslaughter and criminal possession of a weapon.

"Her bonnet is laying in a pool of blood," her boyfriend, Jerelle Martin, said.

Martin described the moment detectives showed him the crime scene and the bonnet that Watson often wore to her job at the Fairway grocery store in Red Hook. But also with her on that commute home was a bottle of pepper spray.

"This is not one of those types of neighborhoods," Martin said. "I told her, you have to protect yourself."

It remains unclear what the fight was about, and the investigation is ongoing.