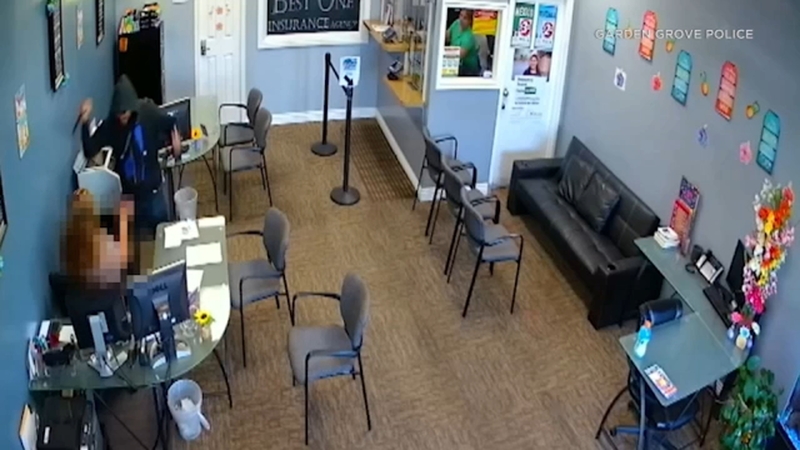 GARDEN GROVE, Calif. -- The day after a two-hour stabbing rampage in Orange County, California that left four people dead and two others wounded, authorities on Thursday identified the suspect in custody as a documented gang member and convicted felon.

Zachary Castaneda, 33, was being held in lieu of $1 million bail, according to online sheriff's records. Garden Grove Police Chief Tom DaRe said Castaneda had previously been incarcerated for possession of methamphetamine with the intention to distribute while armed with an assault weapon.

Disturbing new video released Thursday shows the viciousness of one of the multiple attacks.

In the video, the suspect is seen entering an insurance office in Garden Grove.

He approaches a woman sitting at a desk and then pulls out two long knives that had been concealed in his shirt. With a blade in each hand, he repeatedly stabs and slashes at the woman as she desperately tries to fend off the attack with just a low desk separating them.

She manages to stand up and retreat to the back of the office and tries to put chairs between them as he continues approaching. Then he notices another person at a window counter in the office. He approaches the window, grabs some cash and takes off.

Police say the woman seen in the video survived the attack and was treated for her wounds.

Law enforcement officials say changes in state law a few years ago led to Castaneda being released earlier from prison than he would have under the earlier law.

Officials clarified that while he was not released early from his sentence, the length of time of that sentence was shorter than it would have been prior to the changes made in California's Assembly Bill 109.


"He is a violent criminal who should have never been considered for release," Garden Grove Mayor Steven R. Jones said, lambasting the bill passed into law by voters in 2011.

The Public Safety Realignment initiative was a response to a U.S. Supreme Court order to move inmates out of California's 33 state prisons because of a shortage of medical and mental-health care. The initiative sought to shift part of that population -- including those convicted on felonies not deemed serious -- into county jails.

Castaneda was taken into custody Wednesday afternoon after he came out of a 7-Eleven in Santa Ana, and dropped a knife and a handgun that he had taken from a security guard by cutting off the guard's belt and holster, police said. He told officers the blood he was covered in was tomato juice, Garden Grove Police Lt. Carl Whitney said.

The arrest occurred after a killing spree that spanned seven separate crime scenes in two cities. Some of the attacks were captured on surveillance video, Whitney said.

The motive in the case appeared to be "robbery, hate, homicide," the lieutenant said.

The six victims ranged in age from 25 to 64. Witnesses told investigators the suspect did not say anything to the victims, but rather "he just savagely attacked these people," Whitney said. 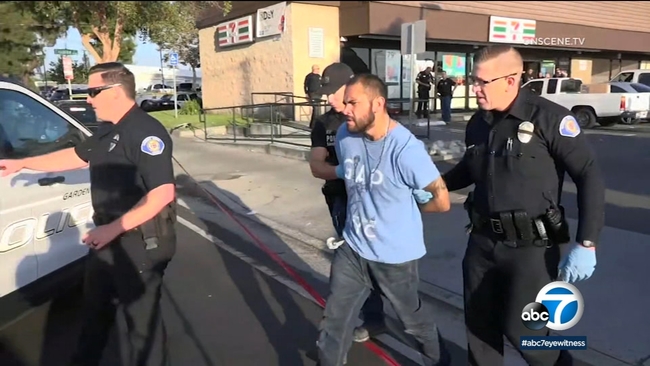