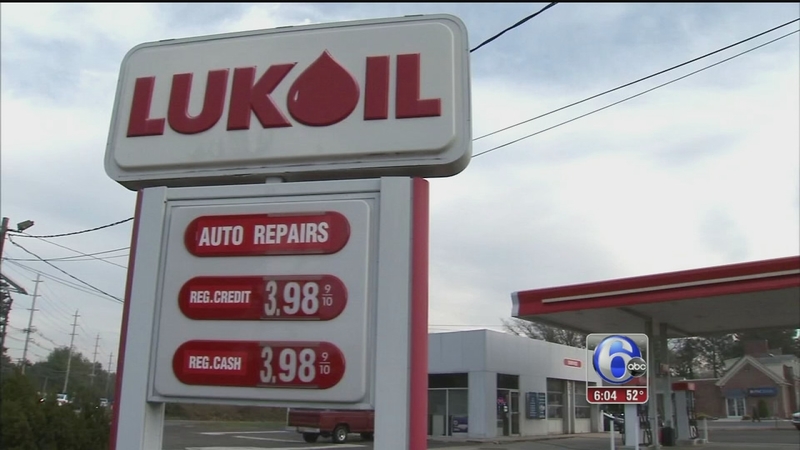 VOORHEES, N.J. -- If you're in Voorhees, New Jersey and are looking to fill up your tank with gas, you might want to be very careful about which gas station you pull into.

There's a Lukoil station that's apparently gone rogue, charging a lot more than those around it.

The Gasoline Retailers Association tells Action News stations can charge whatever they want, but some local residents aren't buying that.

"How many people is this guy going to rip off and get away with it?" Jeff Pettit of Voorhees said.

Pettit says his teenage son recently paid $65 for 12 gallons of gas at the Lukoil station on Haddonfield Berlin Road, where a gallon of regular is selling right now for $3.98 and super goes for $4.59.

Pettit complained to the gas station and also contacted Call for Action. We visited to ask about why this particular Lukoil's prices are so high.

"I don't make the gas prices, my boss does. You know what? Ask him," Caprio said.

Pettit's not the only one who's complained to Caprio about his prices.

"I went up there one time, I don't know why, just to tell him you're out of your mind, he's like 'just don't come here.' It's $3.99 a gallon, how you gonna do that? It's gouging someone," Dave Clark of Runnemede, New Jersey said.

"I don't make the gas prices. I don't know why he does it. I'm not the boss," the man identified as Caprio said.

A spokesman for Lukoil tells Action News they've received several complaints about high prices at the station and that the company is currently in litigation to strip Caprio of his franchise.

We did notice the pumps at the Lukoil were mostly empty and the Citgo across the street, where regular sells for $1.79 a gallon, kept busy.

"Why pay double? If I have a cold beer after work, I'm not going to go to a bar that has double the price," Jim Tierney of Voorhees, New Jersey said.

The station owner was not happy to see us Monday and called the police on us and on Jeff Pettit as well.

Lukoil tells Action News that it has not supplied product to the station in several months, but it would not tell us anymore because of pending litigation.