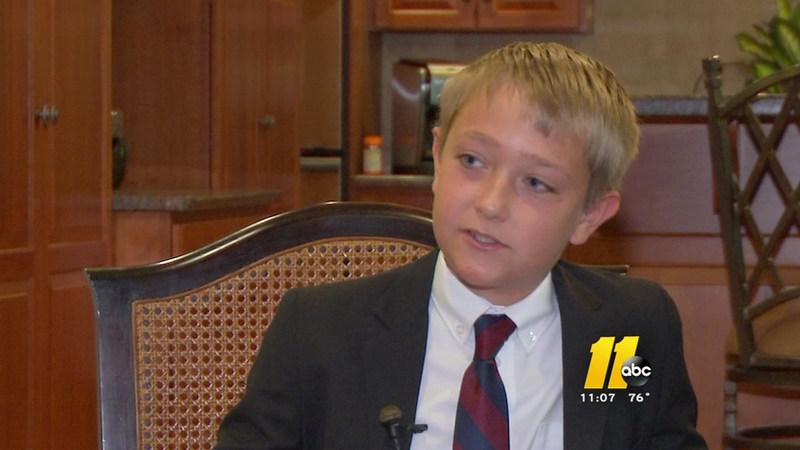 Young Trump supporter is all business

But one of the toughest questions might have come from one of the youngest in the audience.

Pence has been playing good cop to Donald Trump's bad cop over the last week and half, with the Indiana governor doing damage control during Trump's war of words with a Gold Star family and over Trump's refusal to endorse some top-name Republicans in Congress.

In light of that, 11-year old, Matthew Schricker, a Donald Trump loyalist, wanted to make sure Pence was truly committed to the Trump team.

ABC11 sat down with the sixth-grader after the Pence town hall. The boy was wearing his uniform from Cary Academy with a Trump button proudly sticking to his blazer. Matthew has become a political junkie. And he's hooked on Donald Trump.

"Nobody was exactly representing me and when Donald Trump came along, I finally realized somebody was here," Matthew said, describing his fascination with the brash Republican presidential nominee.

Matthew describes Trump as a force of nature that the country needs.

"It's almost like a wildfire; after a wildfire happens, the forest is burned down. That's basically like Trump insulting a lot of people," Matthew explained. "But after that, the forest regrows, it flourishes better than ever before."

"I've been noticing that you've been softening up on Mr. Trump's policies and words and is this going to be your role in the administration? " Matthew asked Pence from the audience.

Pence seemed a little surprised at first, first pointed Matthew and remarked "Now, this boy's got a future." He then told the Matthew that "differences in style should never be confused with differences in conviction."

"Let me tell you what, I couldn't be more proud to stand with Donald Trump shoulder to shoulder," Pence said.

Matthew's mom and dad, both Raleigh doctors, were caught off guard by it all.

"That's Matthew, it's legit; it's the way he is," said Matthew's mom, Dr. Mary Schricker.

Matthew subscribes to even the most controversial of Trump proposals; he want to build a wall along the U.S.-Mexico border and impose a ban on some Muslim immigration.

"Because there's so many people that have been killed by illegal immigrants," Matthew said.

Matthew's parents say they embrace political back and forth and aren't concerned about their son embracing Trump.

"We enjoy arguing with him and discussing politics with him when he wants to discuss it -- which seems to be always," Dr. Paul Schricker said. "We obviously are concerned about any of our children becoming too right wing or left wing. So that's why we try to expose them to different viewpoints."

After Matthew's question, Pence suggested the boy could go on to be North Carolina governor one day.