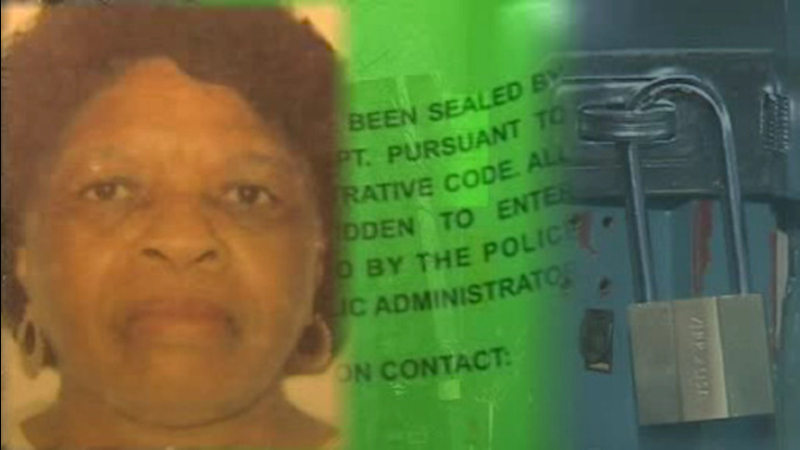 PROSPECT LEFFERTS GARDENS, Brooklyn (WABC) -- A wake was held for the 82-year-old woman murdered in her Brooklyn home.

The killer is still on the loose as the victim's family mourns her.

Who would want harm Myrtle McKinney?

"It is a tragic event, but as we move further we grieve and deal with this situation today," said Mark Lewis, the victim's son.

Grieving the loss of his mother, Lewis and the rest of his family paid their respects to her at a private wake and funeral Friday night.

They are also left with the tragic question of why someone would want to take her life.
"I came back on Monday, because she doesn't have anybody with her on Saturdays and Sundays," said Patricia Goodman, McKinney's home health care aid.

Goodman saw her last in early November. When she arrived on November 9th she got no response.

"I was knocking on the door and could not get an answer and I was very worried. I know something was wrong," Goodman said.

Police were called and when they entered the apartment, which is now padlocked and sealed, they found McKinney in the kitchen. Patricia was suspicious.

EMS pronounced her dead, and at first it was believed that she had died of natural causes.

But Eyewitness News has learned that while her body was being prepared for burial, earlier this week at the Caribbean Funeral Services, a knife wound was found on the back of her neck which police confirmed.

"We grieve and deal with this situation today. There will be more details later," Lewis said.

Some friends at the wake and funeral were just learning of the homicide investigation and find it most troubling.

"She was able to move around. It's good exercise and she wanted to come out of her house. You shouldn't be afraid. It's such an unfortunate thing. It really is a tremendous loss," said Bernadeth Johnson, a family friend.

Originally from Jamaica, McKinney had lived at her apartment for a number of years and was still very independent.

"She's very...had an independent spirit. She wasn't weak. She was a very strong woman. She took care of herself," Lewis said.