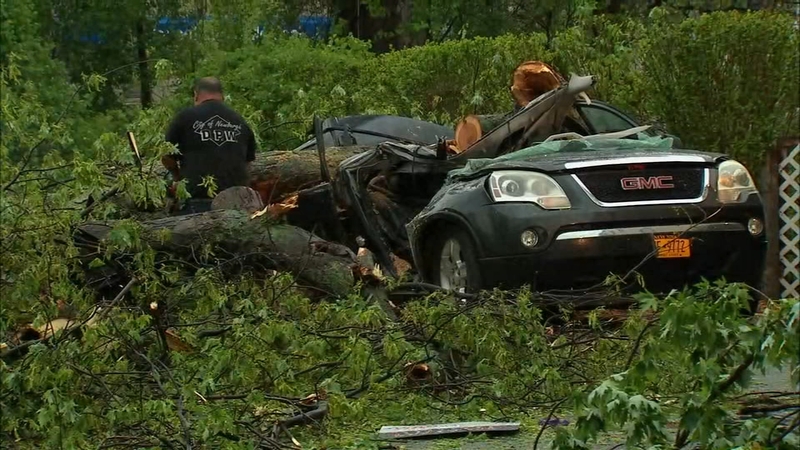 NEW YORK (WABC) -- The National Weather Services says at least three tornadoes touched down in the New York area during powerful storms that tore through the region Tuesday, as communities across the New York area continue to assess the damage and injury toll.

Two of the tornadoes were in Putnam County, while the other, an EFO tornado, struck Newburgh with winds of up to 85 mph.

The storms crippled mass transit during the busy evening rush and led to widespread power outages, and so far, five deaths are being blamed on the weather.

Two people were killed in Newburgh, including an 11-year-old girl who died when a tree fell on her family's car as it sat in the driveway. Authorities say the girl and her mother had arrived at their Robinson Avenue home around 4:15 p.m. and were unloading the car when police say the wind caused a large tree to topple. The girl was extricated by the fire department and transported to St. Luke's Hospital, where she was pronounced dead. The mother suffered minor injuries.

The victim's identity has not yet been released. The second death happened on Albany Post Road, where a woman was killed when a tree toppled onto her car.

Two fatalities were also reported in Connecticut. Authorities say a person died when a tree fell on a car on Brush Hill Road in New Fairfield, and a man doing yard work at a residence at Candlewood Lake in Danbury took shelter in his pickup truck before a tree fell on top of it. Danbury Mayor Mark Boughton said a teenager suffered serious injuries when he was hit by the roof of a dugout on a baseball field.

Finally, Ramapo police said an 80-year-old Chestnut Ridge woman died when her car was struck by a falling tree while traveling south on Red Schoolhouse Road just before 5 p.m.

Trees toppled onto homes and cars across New Jersey, and a $100,000 show car was destroyed when a tree crushed the owner's garage in Mahwah.

"I looked out my window and I saw my garage crushed," Al Vallese said.
EMBED More News Videos

Lucy Yang reports on the severe weather from Mahwah.

Fortunately, the man and his family were not injured.

On Jefferson Street in Passaic, a roof peeled off a nursery school with children and adults inside. No one was hurt, but the roof remained in the street in front of the business.

"It makes me so sad to see part of my building on the ground, although I am relieved that nobody was hurt," said Susan Dannemiller, executive cirector of Children's Day Nursery.

Dannemiller said that when the storm hit, it was 5 p.m. and most of the children had been picked up for the day.

"We had about 10 or so children here at the time and about eight staff members," she said.

Still, there were 18 people inside the building when the roof started to peel off.

"We notified our parents, so they were aware of what happened," she said. "And all the children got home safely at the end of the day."

She hopes to reopen the school as soon as possible.

Downed trees led to incredible property damage as homes and cars were crushed, and hundreds of thousands of residents remained without power due Wednesday. Crews were working around the clock to clean up the mess and restore service.
EMBED More News Videos

Tim Fleischer reports on the aftermath of the deadly storms.