Tropical Storm Isaias sweeps across NYC and the Tri-State area 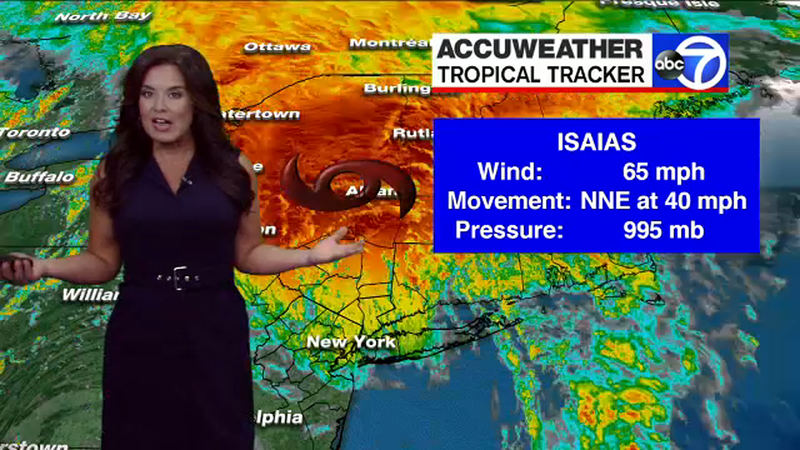 Tropical Storm Isaias swept across NYC and the Tri-State area

NEW YORK (WABC) -- Tropical Storm Isaias unleashed tornadoes, dangerous winds, and heavy rain sweeping through the Tri-State area with nearly as much power as it had after making landfall as a hurricane near Ocean Isle Beach, North Carolina.

More than 12 hours after coming ashore, Isaias still had sustained top winds of 65 mph (105 kph). By mid-afternoon a racing Isaias had crossed the state line just west of New York City, where winds forced the Staten Island ferry and outdoor subway lines to shut down.

The storm sparked more than a dozen tornadoes from North Carolina to New Jersey.

RELATED: Tornadoes in New Jersey, more than 1 million lose power due to Isaias

Isaias also dropped torential rain on parts of the Tri-State, as much as a half-foot in parts of western New Jersey.

By late afternoon, the sun had returned across much of the area and the clean-up was underway.

Two people died and about 20 were injured after a tornado "totally demolished" several mobile homes in Windsor, North Carolina, said Juan Vaughan II, county manager for Bertie County. Three people were unaccounted for, authorities said. "We're still in active searches going on right now," Vaughan said. "We really want to make sure everyone is found safe as soon as possible." An aerial shot showed fields of debris where rescue workers in brightly colored shirts picked through splintered boards and other wreckage. Nearby, a vehicle was flipped onto its roof, its tires pointed up in the air.

"It doesn't look real; it looks like something on TV. Nothing is there," Bertie County Sheriff John Holley told reporters, saying 10 mobile homes had been destroyed. "All my officers are down there at this time. Pretty much the entire trailer park is gone."

Isaias toggled between hurricane and tropical storm strength as it churned toward the East Coast. Fueled by warm ocean waters, the storm got a late burst of strength as a rejuvenated hurricane with top sustained winds of 85 mph (136 km/h) before coming ashore late Monday near Ocean Isle Beach, North Carolina.

The storm made landfall in the Carolinas, and several homes in one quiet beach town went up in flames.

THE BAHAMAS
Meanwhile, officials in the Bahamas cleared people out of Abaco island who have been living in temporary structures since Dorian devastated the area, killing at least 70 people. Bahamian officials said they were concerned about a Category 1 storm hitting amid the coronavirus pandemic.
"The center of COVID-19 now is in Grand Bahama," the island's minister, Sen. Kwasi Thompson, told government-run ZNS Bahamas. "No one wanted to see a situation where we are now facing a hurricane."

The Bahamas has reported more than 570 confirmed COVID-19 cases and at least 14 deaths. It recently barred travelers from the U.S. following a surge in cases after it reopened to international tourism.

Paula Miller, Mercy Corps director for the Bahamas, told The Associated Press that people on the island were still standing in line for gas on Saturday ahead of the storm. The area was still recovering from Dorian, complicating preparations for this one."

Authorities closed Florida beaches, parks and virus testing sites, lashing signs to palm trees so they wouldn't blow away. Officials also adapted their shelter policies to the pandemic, providing spaces where people could stay safely apart from each other to prevent the spread of the virus. In Palm Beach County, about 150 people were in shelters, and they were wearing masks, said emergency management spokeswoman Lisa De La Rionda.

The county had a voluntary evacuation order for those living in mobile or manufactured homes, or those who felt their home can't withstand winds. In Indian River County, north of West Palm Beach, Florida, emergency shelters were clearing out Sunday after Isaias was downgraded to a tropical storm. Officials told TCPalm newspapers that 38 people registered at three schools used as shelters.

Those areas now must be cleaned to ensure no traces of the coronavirus remain as teachers and staff report Monday to prepare for the upcoming school year. No one checked in with COVID-19 symptoms. Temperature checks were done at the door, officials said, and isolation rooms were designated in case anyone came in with symptoms.

CARIBBEAN
Isaias caused destruction and two deaths as it uprooted trees, destroyed crops and homes, and caused widespread flooding and small landslides in the Dominican Republic and Puerto Rico. One man died in the Dominican Republic. In Puerto Rico, the National Guard rescued at least 35 people from floods that swept away one woman, whose body was recovered Saturday. Isaias then snapped trees and knocked out power as it blew through the Bahamas on Saturday.

Officials in the Bahamas opened shelters for people in Abaco island to help those who have been living in temporary structures since Dorian devastated the area, killing at least 70 people in September 2019.

As Hurricane Isaias swirls toward Florida, 400,000 people are without power in Puerto Rico.

HOW TO PRONOUNCE ISAIAS

If you were wondering, according to the National Oceanic and Atmospheric Administration, the proper pronunciation is ees-ah-EE-ahs.
The Associated Press contributed to this report.