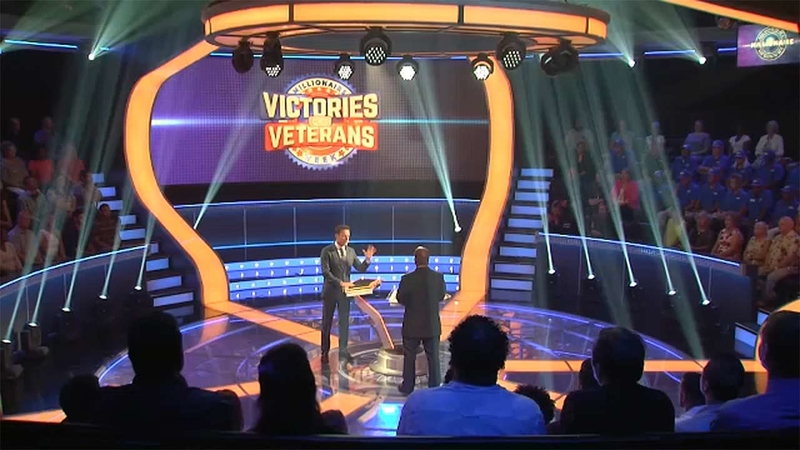 NEW YORK (WABC) -- It is "Victories for Veterans" week on "Who Wants To Be A Millionaire," and each contestant on the game show has served in one of the U.S. Armed Forces.

"Who Wants To Be A Millionaire" and its host Chris Harrison have found a great way to thank veterans for their service.

"To be able to give back for an entire week is a pretty special thing," Harrison said. "You know we do some cool stuff here at 'Millionaire.' To me, that is probably the most important and impactful week we have."

Eyewitness News caught up with Harrison and the entire team for a week's worth of tapings, featuring those who have served in the U.S. military.

The contestants have a long walk before they reach the main set.

"I mean, you're walking into the arena, and you know if you grew up watching this or if you've ever seen the show, it's pretty iconic," Harrison said. "It really is the type of arena that gives you that electric energy."

Eileen Lanzarone, who grew up in Park Slope, said it's much harder to play here than at home, where people aren't looking at you.

Lanzarone said the host has an ability to put every contestant at ease.

"I felt a little bit like I was just talking to him and not the rest of the world when we were doing it," she said. "So he made it really easy."

Harrison said that he likes to think that he is here for the contestants.

The show is celebrating a milestone this month. The syndicated game has given away a total of $100 million in its 17-year history.

"Victories for Veterans" week on "Millionaire" was organized with the help of Disabled American Veterans, a non-profit charity. And for each contestant who reaches the $100,000 question, the show will donate $5,000 to D.A.V.

"Who Wants To Be A Millionaire" airs every weekday at 2 p.m. on ABC7.