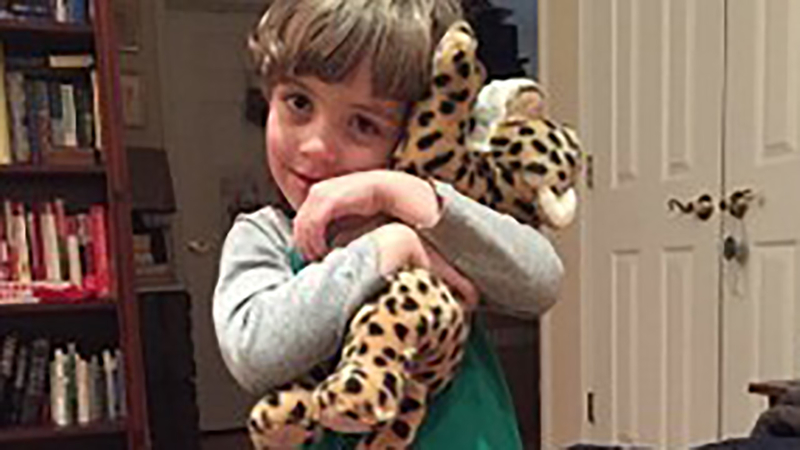 BROOKLYN, New York City (WABC) -- A boy from Brooklyn reached out to Rhode Island State Police after losing his favorite stuffed animal, and little did he know the story would soon have a happy ending.

Four-year-old Will Ketcher had been traveling with his family when his stuffed cheetah Roger fell out of the car window. So he wrote a letter, which arrived at the police station last fall.

"Dear Rhode Island State Highway Patrol," the letter read. "I lost my Roger...can you please find him? I love him...Roger is a cheetah. He fell out of the car window on Interstate 95 around West Greenwich. He is about 12 inches long."

Included was a hand-drawn picture of the stuffed animal.

Corporal Lawens Fevrier said he was touched by the letter, thinking of his own young sons at home.

"I know how important it is for them to sleep with their blankets or stuffed animal," he said. "We were all 4 years old at one time in our lives."

Will's mom, Stephanie Ketcher, said the family was never expecting to hear back from the state police.

"The letter was never designed to be effective," she said.

She said the family had been visiting Will's aunt at the University of Rhode Island when Will was hanging his stuffed cheetah out the window. The stuffed animal then flew out onto the highway.

"That instantaneous reaction of, 'I told you not to do that, I knew he was going to fly out the window,'" Ketcher said. "That quickly went away when I looked in the rear-view mirror and saw his sweet, sad face crumple up."

The family determined it was unsafe to stop and try and retrieve it on I-95. In an attempt to quell Will's devastation, his dad suggested they write a letter.

Fevrier says troopers were on the lookout for the stuffed cheetah on I-95 but fell short.

"We actually did send search and rescue out there," he said. "Unfortunately, it was raining, and we just couldn't find the one that he lost."

A number of months went by, then Stephanie Ketcher arrived home and saw a package waiting.

"I saw the return label on the box, and I couldn't even believe it," she said.

When the family opened the box, there was a brand new stuffed cheetah for Will, and a letter from the Rhode Island State Police.

"On behalf of the Rhode Island State Police, we are so sorry that Roger was lost," the note read. "We spent days looking for him on the highway. We couldn't find him. We did find another cheetah walking around the highway. We stopped to talk to him. He said that he was looking for a new home in the Big Apple and we thought of you. Before we sent him to you we had to make him a Cheetah Trooper. The first cheetah trooper in the history of the Rhode Island State Police."

Ketcher said the gesture restored her faith in humanity.

"There's so much negative stuff going on in the world, we're inundated with it," she said. "It's so refreshing to have something like this happen that just reminds you that there are really good people out there."

Will thanked the state police and said he gave his new cheetah a very fitting name: Rhody.