KABC
By Eileen Frere, Josh Haskell, John Gregory and ABC7.com staff
TARZANA, LOS ANGELES -- A DUI suspect who led police on a dangerous high-speed chase through the San Fernando Valley in a stolen RV with two dogs on her lap has been identified.

The California Highway Patrol identified the suspect as Julie Ann Rainbird, 52, of Winnetka.

The chase started around 7 p.m. in the Santa Clarita area for failure to yield, according to the California Highway Patrol.

Authorities said the RV was stolen from Giant RV in Downey. The owner of the RV, a Granada Hills woman, said not only was her RV stolen, her identity information was stolen as well. That information was used to purchase a motorcycle in Simi Valley. The theft victim was notified of that purchase on April 30, which is when she reported the crime to Simi Valley police.

The recreational vehicle smashed into at least six other cars during the chase, shredding the side of the vehicle's passenger side open.

In the middle of the chase, one of the dogs jumped out through the smashed front windshield and ran off as she continued driving.

The pursuit finally ended when the RV collided into a car in Tarzana and the woman jumped out and fled on foot. Officers quickly tackled her and took her into custody as she was trying to jump the fence of a home in the neighborhood.

The wild ending to the chase stunned neighbors of the quiet neighborhood.

"These streets are narrow," said Tarzana resident Craig Friedman. "Sure, she was just evading police, but my God, you gotta stop. You know you're gonna get caught."

Two dogs that were on a woman's lap as she drove a stolen RV through the San Fernando Valley were recovered safely.

AIR7 HD was over the pursuit as the suspect struck a palm tree in a shopping center before continuing. The front end and passenger's side of the RV had significant damage, with the windshield smashed in and the door missing.

At several points, the woman was driving up to 60 mph on surface streets. The driver also smashed into several vehicles, including a sedan in an intersection.

The man who was in that vehicle suffered six broken ribs and a punctured lung and was being treated at a local hospital.

Authorities were able to recover the first dog that jumped out of the vehicle. An animal control officer was able to loop the second dog, which appeared to be injured, at the scene. It was leaving bloody paw prints behind as it stayed by the woman's side.

A woman in an RV led authorities on a wild chase from the Santa Clarita area, crashing into two cars before finally before taken into custody in Tarzana.

The dog was being checked by a veterinarian.

The driver crashed into a white Hyundai sedan in Tarzana and fled on foot with the second dog for a short time before being taken into custody around 7:30 p.m. near Tampa Avenue and Wells Street.

Two people inside the Hyundai were injured.

Rainbird also suffered unknown injuries and was treated by first responders at the scene. She is expected to face charges that include driving under the influence, felony evading and felony hit-and-run.

A woman driving an RV smashed into a car in Tarzana after a wild police pursuit. 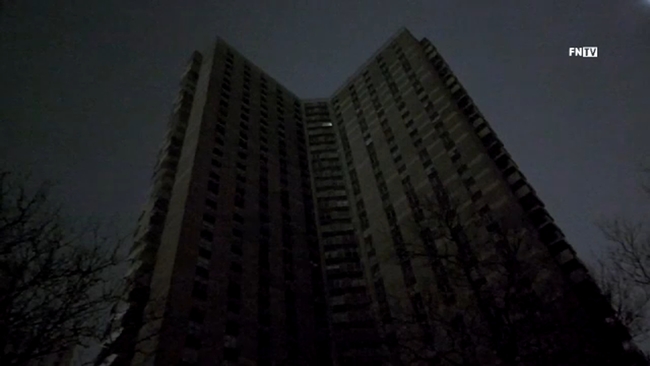