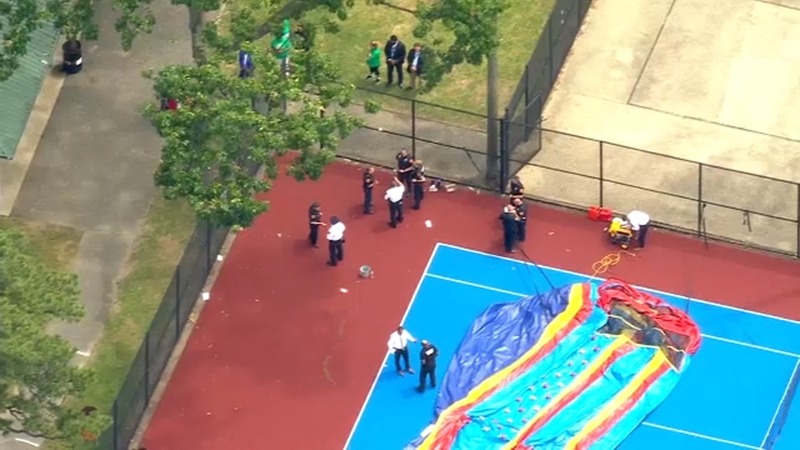 WYANDANCH, Long Island (WABC) -- More than a dozen children were injured when an inflatable bounce house toppled over in a Long Island park Tuesday morning.

The children from Lafrancis Hardiman Elementary School were at the park as part of field day in the Wyandanch School District.

The bounce house, which also had a large slide and a rock climbing wall, was packed with 6- and 7-year-old kids inside and on top when it fell over.

Horrified parents watched as their children flew in the air and landed on the tennis court.

"The bounce house lifted up, and when it lifted up, you saw him go over first, another little girl holding on for dear life," said one mom who didn't want her name used. "It was horrible."

One child, 7-year-old Jayson Randolph, was nearby and had other children fall on top of him.

"There was too much people in the bouncy house, and then the thing fell over," he said. "And some people got hurt and they went to the hospital...Some of them fall on me and some of them did not."

Thankfully, all of the injuries appeared to be minor, though one child suffered a broken leg.

Police said there were 14 children on the slide at the time, though the total number of injuries -- including anyone hurt on the ground -- remains unclear.

Four other children were transported to hospitals for minor injuries.

Another mom said her daughter was hurt, but it was another child with a more serious injury.

"When I seen that child go from the sky up, fell to the gate, and that's where he landed," she said. "You heard it when he hit his head. It was horrible."

Lamont Brown's two children, in second grade and Pre-K, were just feet away.

"When it fell it over, it came over like a big tree just tumbled over, kids falling off, it was ridiculous," he said. "My daughter was leaving because she decided that she didn't want to get on the bouncy house. There was just too many people, so we were walking away when it went over. We seen it blow over as we were walking away, so thank God she didn't get on."

Parents at the scene said they had concerns that the slide was not properly secured, but the investigation is ongoing.

"We recognize this is a very scary event witnessed by our young scholars, staff, and families, and we are deeply concerned about how this could have happened," Superintendent Dr. Gina Talbert said. "The district has immediately initiated a thorough investigation, including working with the company who provided the inflatables, into the cause of this situation. We will provide more information as available. At this time, our priority is the health and well-being of the students who may have been injured and those students who attended the event."

Video from the scene shows flames shooting from a second floor window and multiple firefighting units on the scene.

It's not clear if the wind or the weight of the children made the bounce slide buckle, but Jacob Khoury, the manager of Jump Around Party Rentals based out of Huntington, says everything was done properly.

"The bounce house was secured properly," he said. "I was here to install it this morning myself."

He says the elementary school chose not to hire an attendant, which means it was the school's responsibility to monitor the kids.