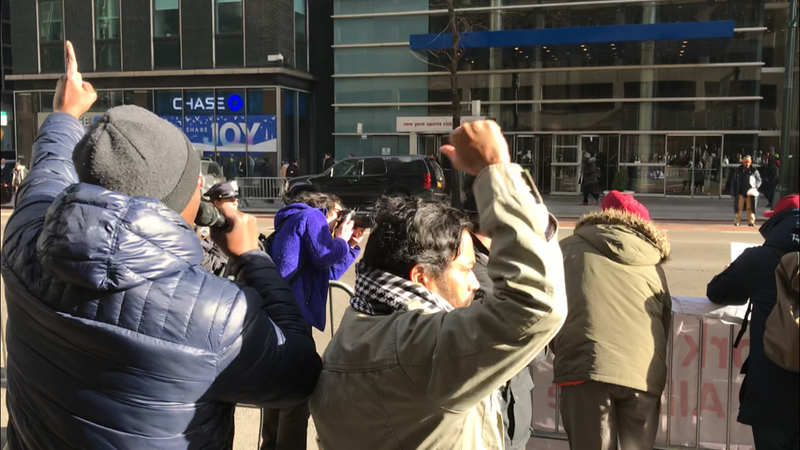 The fee is scheduled to go in effect on January 1 for all taxi and for-hire-vehicle rides that pass through the borough below 96th Street.

Some of the money raised by the fee would be use to fix the aging MTA subway system.

The New York Taxi Workers Alliance says that eight drivers have committed suicide in 2018, and city should not add more financial pressure.

"The governor took the path of least resistance, saying, 'You know what, let's put it on the yellow cab drivers, no one's going to mind,'" retired taxi driver David Pollack said. "Well we're out here today in the cold. We're calling for a delay in the legislation until something logical, an intelligent plan, can be made. It shouldn't be on the backs of drivers."

Drivers are urging Governor Cuomo to postpone the plan in favor of something more comprehensive that applies to all vehicles, not just taxis.

And a spokesman for the governor issued the following statement:
"The state budget approved by the Legislature last year included a congestion surcharge as the first phase of the FixNYC plan and the first step in addressing the City's congestion problem. 100 percent of this revenue will go directly to fixing the subways. Next year, we will continue to work with the Legislature to evaluate this surcharge and pass comprehensive congestion pricing on all vehicles once and for all."

The alliance notes that Uber spent more than $100,000 lobbying for this version of congestion pricing.

When a passenger requests a group ride on Uber, Lyft and other app companies, even if the trip isn't matched with a second passenger, the fee will only be 75 cents.

The proposed fee is $2.50 for yellow taxis and $2.75 for green cabs and other for-hire-vehicles.

Yellow taxis currently have a 50 cent surcharge on each fare that funds the MTA. The congestion fee would be additional.