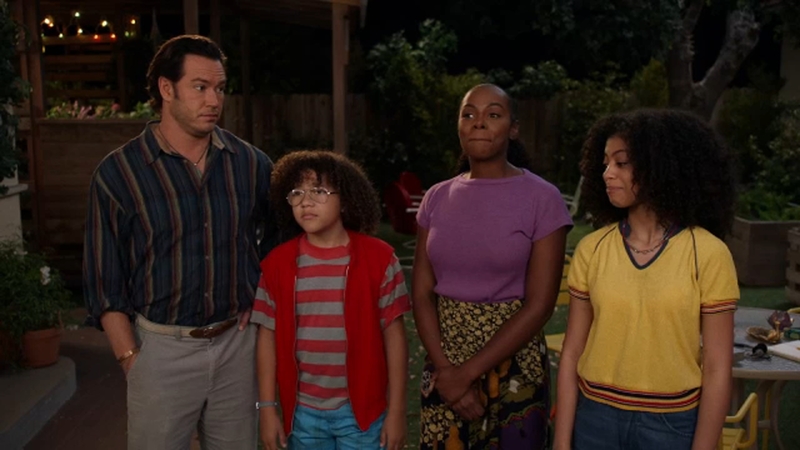 'Mixed-ish' star excited for 'evolution of family' in second season

NEW YORK -- First came "Black-ish," which was followed by a spin-off on Freeform called "Grown-ish," and then another ABC sitcom "Mixed-ish." That sitcom returns to prime time Tuesday evening.

It's a prequel, meaning the show tells the story of how Tracee Ellis Ross's character from "Black-ish" became the dynamic woman she is today.

Ross continues to narrate this spin-off, but her younger self is played by Arica Himmel from Manhattan. The character known as 'Bow' is looking back at events that took place in 1986.

Her mother is played by Tika Sumpter.

"What excites me the most about coming from season one to season two is the evolution of our family," she said.

Sumpter spoke to me on a Zoom call with Mark-Paul Gosselaar, and both agreed that just the fact they were able to make a second season is cause for celebration given the spread of COVID-19.

"This has been a really trying period of time for everyone," he observed. "And for us, it's not what we're used to, but we've all come together, and we're trying to make a great product for the audience, and hopefully they'll appreciate it."

"Black-ish" has met this troubled moment in our nation's history by talking about it on the show, and the spin-off has not ignored the challenges we face -- although "Mixed-ish" takes place 35 years ago.

"That's the sad part," noted Gosselaar. "That (the problems) have been around as long as my generation has been around and even further than that."

As a situation comedy, "Mixed-ish" must make us laugh too, of course, so there has to be a balance between light and serious.

"Just the fact you can turn something on and escape and laugh and walk away with a nugget of something you might have not known," says Gosselaar.

And, walk away with "empathy" adds Sumpter.