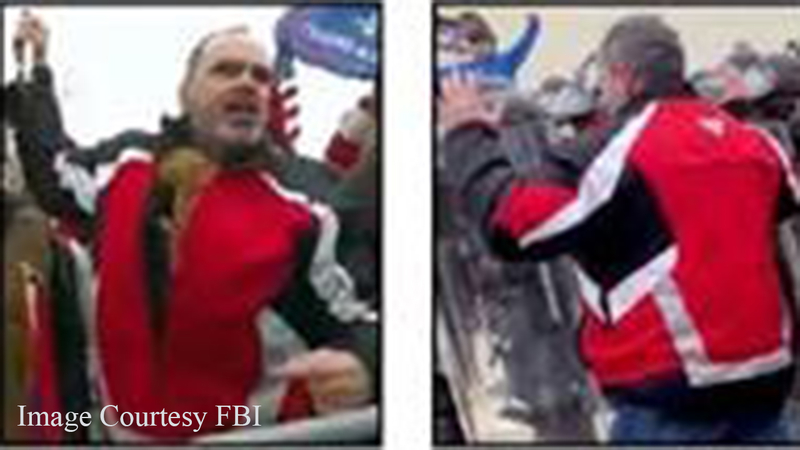 NEW YORK CITY (WABC) -- A former NYPD officer and a prominent Queens Republican are the latest arrests in our area connected to the January 6 riot at the U.S. Capitol.

When he served, Thomas Webster provided security at both City Hall and Gracie Mansion. But that background in securing government buildings and officials did not stop him from summoning "pure rage" to "unleash violence" on a Capitol police officer using a metal flagpole, federal prosecutors said Tuesday.

Webster, 54, a former Marine, surrendered to the FBI office in New Windsor to face six charges including attacking a federal officer.

"(Expletive) piece of (expletive)," he yelled as he attacked the officer. "Commie mother (expletive)."

Prosecutors sought to have Webster held without bail, noting he was caught on video assaulting a current Capitol police officer with an aluminum pole that once flew a Marine Corps flag.

"These videos shock the conscience," assistant US Attorney Benjamin Gianforti said. "We see the defendant, clear as day, attacking a police officer, first with an aluminum pole and then with his bare hands, ripping the officer's protective gear off."

Gianforti said Webster wore a bullet proof vest during the attack and told agents he brought a gun with him to Washington, indicating he was prepared for armed violence.

"We see what I would describe as a look of pure rage," he said. "His teeth are gritted. This is a man who was about to unleash violence on that poor police officer."

In seeking pre-trial release, the defense stressed Webster's ties to New York, his service in the Marine Corps, and his following of former President Donald Trump's instructions.

"Mr. Webster went to the Capitol January 6 to participate in a protest, judge," defense attorney James Monroe said. "He's not a leader of any organization. He went there as an American citizen. He went there to an event that was urged on by our president."

Webster served with the NYPD for 20 years and never fired his weapon, the lawyer added.

RELATED | Long Island man arrested after 'smoke out' at the Capitol

The judge rejected that argument, holding Webster without bail.

"The conduct on the video does shock the conscience," said Magistrate Judge Andrew Krause, adding that part of the reason was because of Webster's prior service in law enforcement and military. "It makes it particularly troubling and perplexing to weigh that impressive resume of public service against what we see in this video. What we see in this video is a person who flat out attacks a law enforcement officer, first verbally and then with a metal pole that he swings repeatedly."

Republican District Leader Philip Grillo was identified at the riot by his embroidered Knights of Columbus jacket after prosecutors say he entered the Capitol through a broken window, holding a megaphone in his hand.

He allegedly made his way around three Capitol police officers and joined a crowd shouting, "Fight for Trump." Authorities say the crowd was engaged in a physical confrontation with uniformed officers at the entryway, with Grillo near the front of the crowd.

Grillo was charged with trespassing and obstruction of Congress and was released on $100,000 bail. Bond was secured by his mother, with whom he lives, and his uncle, Conrad Augustin.