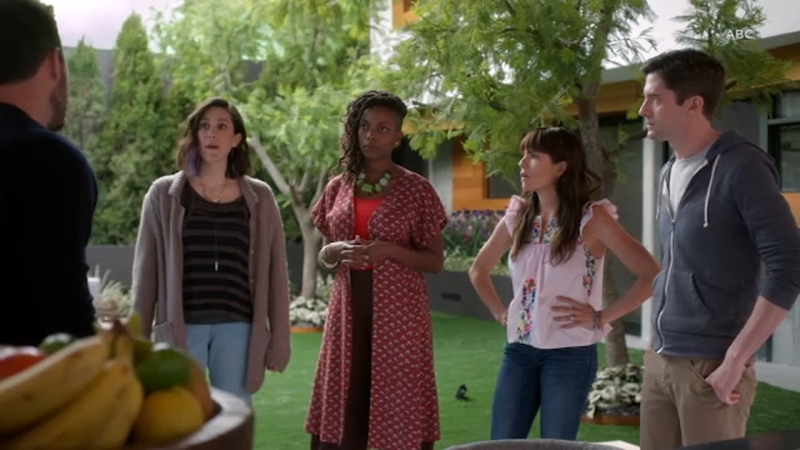 HOLLYWOOD -- Topher Grace hit it big with the sitcom "That Seventies Show;" Karla Souza, as one of the stars of the thriller, "How to Get Away with Murder." Now, they have joined forces to play husband and wife in the new ABC ensemble sitcom, "Home Economics."

Grace plays the eldest of three siblings. While he and his sister are struggling, their little brother is on "Easy Street." Grace, who is also an executive producer, says the chemistry of the cast was key.

"I've been part of a team like that once before and I felt it on this," said Grace.

When Grace met Souza, he knew she had to play his wife.

"My wife said, 'Send her flowers.' So I sent her flowers with a note that said, 'Will you be my wife? Love, Topher.' And then, I mean, she can tell the rest of the story, but unfortunately, her husband got the flowers instead is a real bummer," laughed Grace.

"I, of course, made phone calls to casting directors and people who I knew had worked with him and every single person had, you like, like you said, just nothing but good comments about him," said Souza.

"People just want joy right now in their life and I was so happy to be doing this project because I think it speaks to what we're all craving, which is family and togetherness," said Grace.

"To be laughing, especially during this time, I'm very lucky to have a job, to be able to work and to be able to laugh while I'm doing it," said Souza. "It's the best."

"They're all coming from different places, very different places, and that's what makes it more rich-- pun intended!" said Grace. "I really mean it when I say Dream Team. It's just like such a pleasure and I feel like this is the thing you're supposed to say in an interview but, truly, we got that special..."

Souza interrupted: "I don't know. This has only been season one. Let's wait, Topher. Let's not get our hopes up!"